My wife and I have a lot of animal companions. Seven cats and a dog share our house, and a horse is stabled a few minutes away. Most of the critters are healthy and easy to get along with. But there are exceptions.

Rommel is basically a thug. 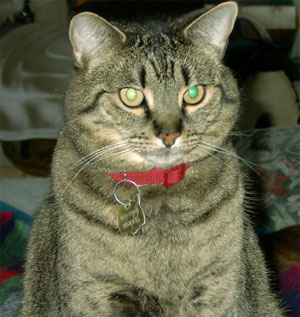 But he’s a lovable thug, within limits. When he was a kitten, he survived a series of unfortunate events: a broken kneecap, a tumour in his mouth, a bladder infection, an abcess in his foot. Later in life, he had FUS…feline urinary syndrome- basically, crystals forming in the urine and causing blockages. You can imagine how happy that made him- ever since then, he’s been on special food.

All of these problems had costs associated with them. So far, in his ten years with us, I’d imagine Rommel has probably generated a couple thousand dollars of “extraordinary” expenses, above and beyond your basic food and shots.

A lot of people look at a pet as a neat accessory for their furniture. Or maybe a cuddlesome stuffed toy. When reality hits, and they discover that animals are people and need care, sometimes costly care, the pet goes out the door.

The real cost of a pet can add up over time, and its a lifetime commitment. A pet doesn’t come into your house on trial- you are committing to care for him or her.

I’m not one of these people who believes in keeping a pet alive at all costs. I can understand that sometimes the cost to keep an animal alive, especially when compared against the quality of life they might live after a given procedure, sometimes isn’t viable. But I do believe that people should go into pet custodianship well informed. Maybe being informed would make people more prone to get the spaying and neutering done early when it should be. Maybe it would stop people from buying pets as a gift.

Rommel is about to cost us another thousand dollars or so. The tumour in his mouth is back and, assuming its benign like it was before, hes going to have it removed. He’s 10 years old- another 10 good years ahead of him, and to me that and the love he’s given us in the past years makes a thousand dollars seem quite reasonable.

But he’s still a thug