I got my MMOG “fix” today…several hours of monster slaying in World of Warcraft with Shane, Monique, and Bryan…that’s the best kind of gaming for me. Then, a little later in the evening, I logged in again and finished a handful of quests.

I have to wonder about the way I play MMOGs, though. I love to be in a group of people I know and trust…people I’ve gamed with for years. The ultimate expression of this, of course, is the list of names in the above paragraph: my Nephew, his wife, and my brother in law. Family. But when it comes to grouping with people I don’t know…well, I forget that whole massively multiplayer part of the game entirely 😉

Case in point: while working on my quests, I came to one part where a particular gnome had to be slain. There was another player nearby when I arrived at the scene, so I checked with him…sure enough, he was waiting for the same gnome. Since he was there first, I tell this other player “when the gnome shows up, he’s yours- I’ll wait.” The other fellow replies…”Uhm, we could group up and both get credit for him at the same time…”. D’Oh…yes, we could.

Forming up a group, possibly with a stranger: that’s at the heart of MMO gaming, and yet here I was playing like it was a single player game. I joined forces with this fellow, we killed our gnome, and everything went well. But here’s the question- why wasn’t grouping up the first thing I thought of?

The whole online gaming phenomena has created some odd social dynamics. To an extent, other players, thousands of them, are kind of like your next door neighbor in modern urban society. You know they are they, you appreciate there presence, but except in rare cases you really don’t want to get too close. If you talk to that neighbor, maybe invite them over for coffee, you are trapped: if they turn out to be jerks, or just incompatible, you can’t get rid of them…they are right next door. I can hear you saying “But I like my neighbors, and I love socializing”- hey, great for you! But that isn’t the way my mind works- I’m a natural loner.

And in a MMOG, everyone is “right next door”: every time you log in, if someone wants to they can know about it. Everyone has to go through certain areas…chokepoints, sort of…to get from area to area, to shop, to train- so you are bound to run into that “irritating neighbor” again and again. And since its a game, its something you do for fun- who wants their fun ruined by an unwanted intruder?

Thus I take the path of least risk- I avoid grouping with strangers. Strange…that word pretty much fits me 😉 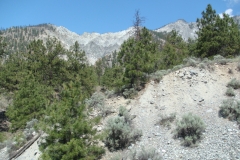