I managed to make a new banner image for this site…what do you think?

Okay, so its really not very new. I took my old Kelly’s World banner image, spread the pictures around, and made the title larger. I’m not an artist- wanna make something out of it? 🙂

There’s one thing missing, though: a picture of Irene (my wife) and I. My old banner had a picture, but the source image was kind of grainy to begin with, and I to make it look reasonably balanced I would have had to increase its size. I went poking around for a convenient picture of the two of us, and I realized I don’t have many choices. I could go get our (15 year old) wedding pictures and scan one in, I guess. Or I could take an image of Irene, and an image of myself, and do some cutting and pasting….but I don’t have many pictures of the two of us together.

Its not that we aren’t together much, but when we are together, who is around to take the picture? And I looked at some recent pictures of myself. I look old and fat: not exactly the way I see myself.

Life is funny…the images we have captured often don’t keep up with reality. Or worse, reality gets out of sync with the idealized images we have of it. I guess I have to accept that I’m old and have a pot belly, and figure out a way to get a good picture of Irene and I together. 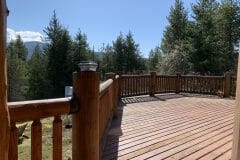