I’m getting another round of bits and pieces together in order to work on the next clock repair challenge in front of me: a circa-1915 mahogany-veneered Ansonia time/strike mantle clock.

Working on this clock is like two separate projects in one: a wood restoration project for the case, and a mechanical rebuild for the clock mechanism itself. And this duality will be true of the majority of the clocks I work on going forward: I like wood mantle clocks more than I like the “figural” or the “stone” cased clocks. So that means I need to learn some things that would be familiar to an antique furniture restorer.

One of the things I need to learn is how to deal with putting a broken case back together, and how to restore the finish. Since these clocks were made something on the order of a century ago, that means dealing with materials and methods that are different from how things are done today. Two big differences: glues and coatings.

Modern glues involve all sorts of plastics and fancy chemicals. They can bond two pieces of wood together so that the bond is stronger than the wood itself- this is great for something that is intended to last at most one generation. Older glues were mostly organic: gelatin, or hide glue, is the most common- it creates a fairly strong bond, but no where near as strong as a modern glue.

Unfortunately, any wood that lasts more than a couple of decades will shift, shrink, dry excessively, and expand with time: in old clocks, this puts stress on those weak glue joints, and that’s what breaks down. In newer clocks, the wood itself usually breaks: the idea is, at that point you throw the item away and buy a new one. With the old pieces of furniture, including old clock cases, the idea is that you re-glue, and use the piece for another generation or two. The old hide glues facilitate this: with heat and moisture, you can return the glue to its original “soft” state, allowing you to remove it/reseat it. Further, unlike modern glues, hide glue can adhere to hide glue so your cleanup doesn’t have to be perfect. Modern glues, on the other hand, require harsh chemicals to “unbond” or remove, causing damage to surrounding finishes and even the wood itself… and if you fail to thoroughly clean the old glue away, the new adhesive won’t bond very well.

All of this suggests that using traditional hide glue is a wise idea, at least on an antique. The biggest benefit, to my thinking at least, is that future restorers can easily remove any mistakes I create: hide glue is forgiving in that way. Note that the most common modern use of hide glue is in musical instruments, where re-furbishing is much more common than in modern furniture.

I have discovered, however, that hide glue isn’t available at “mass market” stores. I can sort of understand this: “liquid” hide glue only has about a one year shelf life, and the really traditional glue flakes require skills and tools most modern woodworkers lack. In other words, Home Depot and Rona don’t stock the stuff, which leaves me with the question: where do I buy it? The general recommendation is to find a small “neighbourhood” hardware store, which just might have more traditional supplies. Unfortunately, I can’t find such a store anywhere locally: it might exist, but the very nature of these old-fashioned stores means they aren’t visible to me. They don’t exist on the Internet, and I’m not fond of the idea of randomly going through the phone book explaining over and over again what “hide glue” is. The blank looks from the people at Home Depot and Rona (all of whom were older than me and, assuming their professed knowledge of wood working, should have known better).

I can find hide glue on the Internet easily enough. Titebond manufactures a liquid hide glue, and is apparently available through several large chains in the U.S.. For reasons unknown, the Canadian arms of these chains have no clue about the stuff. I’ve asked Titebond themselves if they have any Canadian retailers: after a week of waiting, I’ve had no response. 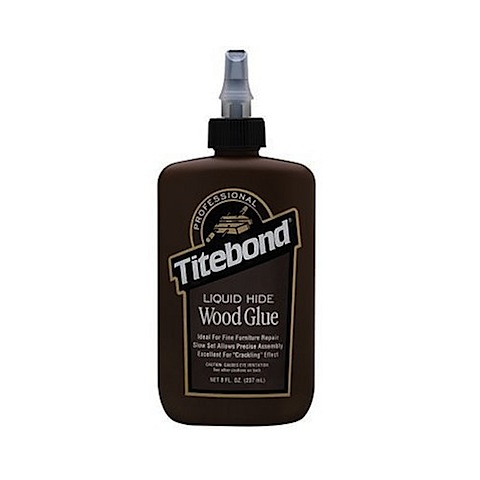 That leaves me with one rather unsatisfying choice: order the glue from an American distributor, and hope that it can make it to Canada. The cost of shipping is greater than the cost of the product, but the real problem is whether it can make it over the border at all. My observation is that anything involving chemicals has a hard time making it through customs, but I’m going to take that chance.

I’m ordering through Woodcraft.com, which claims to ship to Canada and also had slightly less expensive shipping ($12 versus $20) than a couple of other places I tried. They have both liquid hide glue (which I’m ordering), and the ground dry stuff in case I want to use that in the future. 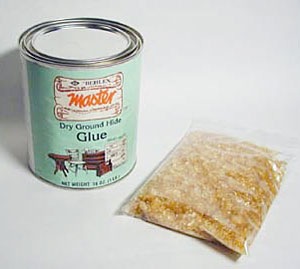 After all this hassle to get glue, I’m really wondering how much fun I’m going to have the first time I try to get traditional shellac flakes…

7 thoughts on “Hide glue… is surprisingly hard to find”