One of the big news items during the past week has been the fact that Steve Jobs, CEO of Apple, is taking a medical leave of absence for several months. The media has been frothing at the mouth over this: speculation regarding the death of Apple in the absence of this one man, guesses regarding the nature of Mr. Jobs’ illness, and even retrospectives of the man’s life as if he is already dead. Frankly, it is too much, and I personally think everyone, the media, the investors, and the public, should be ashamed. I also think that Steve’s leave will be a good thing for him and for the company itself.

First, there is no doubt in my mind that Steve Jobs is a very hands-on executive. He takes a demanding interest into the design and features of every product Apple makes. And his opinions have shaped the nature of the Apple product family: the simplicity of design (E.G.: only one button on the iPhone, no buttons on the Apple TV), the tactile and visual appeal of the products, and “we can change the world” attitude likely have their start with Steve. His influence on the company and its products is far greater than that held by most chief executives.

But Steve is just one man. He has some of the most brilliant designers and product experts in the industry on his executive team. Steve may approve or disapprove certain ideas, but the ideas themselves almost certainly originate with others in the company. Furthermore, the executive team at Apple has been fairly consistent for a number of years: these are people who have worked with, been guided by, and admired Steve for the better part of a decade. They are steeped in his ideas, his approach, and his mantra.

I think that Steve Jobs taking an extended leave is a good thing for two main reasons.

I don’t think Apple is “dead” without Steve. I have more respect for the man and the company than to believe that.

Get well, Steve. And I expect great things from Tim Cook and the rest of the executive team in your absence. 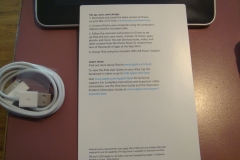