The massive mechanisms and constructs that keep modern society functional occasionally amaze me. A good example is this story from the New York Times regarding the efforts being made to fix a water leak in one of their main supply tunnels.

According to the story, a water tunnel built in the ’40s to supply the needs of New York City has been leaking for the last twenty years. Apparently, a “leak” in this context is something on the order of thirty million gallons of water per day, and amazingly that wasn’t considered bad enough to fix until recently. The problem itself lies over in a 4 meter diameter tunnel nearly 1200 feet below the surface. Divers (yes, divers) are spending one month shifts working and living 700 feet below the surface in a 97% helium environment in order to avoid pressurization issues.

The scale of this type of operation is hard to comprehend. The particular pipe in question is just a small piece of a system that “only” provides 40% of New York’s 1.2 billion gallon a day water consumption needs. It will cost over $20 million just to complete the assessment of the problem, and easily $250 million to fix it. These massive pipes are so far below the surface (over a thousand feet) with some access “towers” being under 700 feet of water, that it takes professional dive teams months of continuous work just to assess the faults.

And every day, we turn on the tap and out comes water, and we don’t give it another thought. Running water is “ancient” technology… but the scale we deliver it on in modern times is staggering, and requires systems, mechanisms, and coordinated effort that simply couldn’t have existed a few hundred years ago.

I don’t envy those divers the work they have to do. But they and the crews working with them are seeing a side of modern society that most people take totally for granted, and it is marvelously interesting to me. 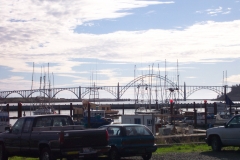