Everyone knows, of course, that you can run Windows applications on a Macintosh. When Macs started shipping with Intel processors this became almost a no brainer. Boot Camp is the most obvious way to achieve the “Windows on a Mac” experience, but is a bit of a brute force approach: when you boot your machine, it is either a Macintosh or a Windows based system, not both at the same time.

Virtual machine software that allows Mac and Windows applications to co-exist on a Macintosh have also been around for a long time. They’ve improved significantly in the last couple of years, concurrent with the same change to Intel processors which facilitated Boot Camp. But knowing this intellectually and seeing it in action are two different things. 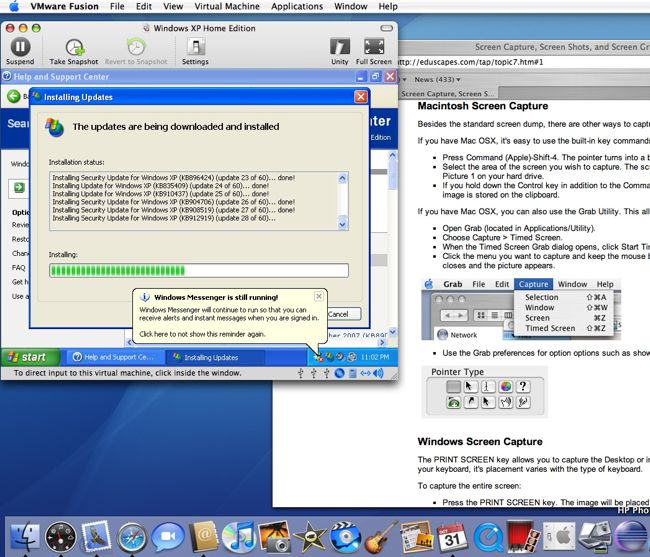 Windows is installing updates in a VMWare Fusion virtual machine running on my Macintosh. Yeah, it is nothing new or exciting for anyone who has had a Mac for a while. But to me it is…spooky. Oh, and I could also have Vista and Linux, all installed and running applications on my Mac at the same time. Intensely weird…

I’ll post more later regarding how well this works. My main objective is to get a couple of simple Windows Apps I haven’t found good replacements for yet working on my Mac. But I might go crazy and see if more complex things like games work at all 😉