I am fortunate to have an employer who was able to allow me to work from home while Irene recovered from her second hip replacement.  It made things much less stressful for all involved.

Working from home for a month, though, leads to some odd behavior.  My hours of work were scattered all over the 24 hour day, partly in order to accommodate things Irene needed me for, partly because I found it convenient to work when Irene was asleep.  I could take naps whenever my eyes started to feel heavy.  There were several days where I didn’t bother to dress.

This past week was my first week going back to the office each day.  It was a shock to my system: resetting myself to a semi-fixed schedule was tough enough, but making it through an eight or nine hour day without a nap was torture.  I raced home from work on at least two days during the week so I could immediately toss myself into bed and close my eyes.

And there is this great desire to have tons of “face time” now that I’m back in the office.  I felt like I was in an endless series of meetings as the week wore on.  The toughest was one four hour meeting on Thursday, during which time I was grilled by three people regarding a complex data model and code design I had originated.  Four hours straight of running my brain at full throttle: I swear, smoke was pouring from my ears.

Yeah, I’m weak, I know: lots of people drive themselves at 110% all the time, and seem to thrive on it.  I have great respect for people who can do this, but no particular desire to emulate them.  For me, the mid-afternoon nap is more in keeping with my continued mental health…I must be ready for early retirement or something.

4 thoughts on “I survived!” 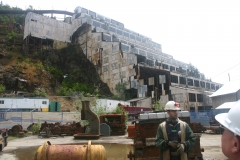