I have been spending some time playing Sigil’s Vanguard lately. It is important to note that I’ve only played my character to about 15th level (and three characters during final beta to about 10th level). A well-rounded review of the game would, in my opinion, require playing at least two or three different classes to mid-levels, and at least one character to nearly maximum level. Since I will likely never do either of these things, I am not going to give an in-depth review here. Instead, these are just some preliminary opinions based on a couple dozen hours of play time. 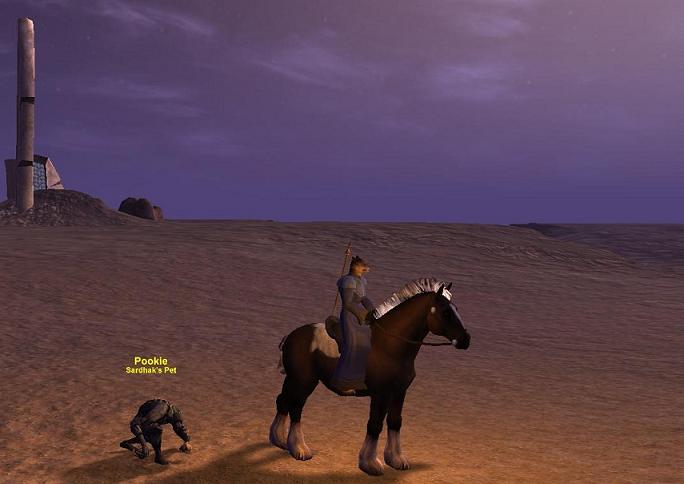 The first thing that I will point out is the fact that Vanguard is a lot more appealing to me in reality than I feared it would be. The original design discussions portrayed Vanguard as a return to the â€œchallengeâ€ that existed with old massively multiplayer RPGs. The premise: games like World of Warcraft and EverQuest 2 are MMOGs with training wheels. To some people, they lack the challenge of things like corpse retrieval and massive loss of experience. They incorporate features to reduce the risk of being â€œtrainedâ€: becoming collateral damage when other players anger larger numbers of aggressive monsters then run past you. And they make widespread use of instancing: creation of â€œprivateâ€ adventuring areas without intrusion by other players in order to make it easier to access content instead of having to compete with other players for limited resources.

Vanguard brings back pretty much all of the above â€œchallengesâ€, but does so with at least some intent to minimize the worst aspects of each. I’ll give one example: character death. When your character dies in Vanguard, you leave behind a tombstone. You can either be resurrected on the spot by another player or revive at the nearest â€œaltarâ€. When you revive, you’ll be missing a fair chunk of experience (approximately 1/20th of a level). You’ll also be missing all of your gearâ€¦well, at least some of it.

Here is where Vanguard improves on the â€œbad old daysâ€. Firstly, you can choose to pay some money and have your gear immediately returned to you at the altar: if you select this option, you’ll still be missing that chunk of experience I mentioned. This means a corpse retrievel isn’t strictly necessary. Further, you can choose to pay a reasonable fee prior to death to have individual items â€œsoulboundâ€. If you do this, they’ll stay with you reincarnate. A wise adventurer in Telon (the world Vanguard takes place in) will soulbind all of their â€œkeyâ€ gear: armour and weapons. This means you don’t have to make your way back to your tombstone nakedâ€¦something old EverQuest players will remember with dread.

Thus far in my experience in the world, I’d call it â€œfairâ€: more challenging than its peers, for sure, but not cruelly so. Vanguard is not a â€œbeginner’sâ€ MMOG, but it isn’t brutal either. The toughest part of Vanguard is probably the fact that it has absolutely zero hand-holding. The game assumes you know how to use the keyboard to navigate, for example, and that you understand the basic concepts of casting a spell, fighting a monster, and accepting / completing a quest. If you are new to MMOGs, I’d say Vanguard could be a bit intimidating. Personally, I was ready to forgoe the â€œhere’s how you go forward/turn left/examine your inventoryâ€ introductions that most MMOGs have today.

Although Vanguard is not revolutionary, it does have some very intriguing features. The key one I’ll point out is something called â€œdiplomacyâ€, a feature that, on first glance, I was very dubious about. Probably the easiest way to think of diplomacy is as a subgame, sort of like crafting (which Vanguard also has). A single character can adventure, craft, and practice diplomacy, and gain skills in each. In terms of game lore, diplomacy is the art of using words to gain advantages over others. As a game mechanic, diplomacy functions somewhat like a collectable card game within Vanguard itself, with it’s own collection of quests and rewards to pursue. You encounter NPCs with whom you can enter into a diplomacy â€œchallengeâ€: the game switches to a special interface incorporating a dialog tree accompanied by selection of cards from your â€œdeckâ€. You have several power pools you can consume or increase using your cards, while shifting a â€œbalanceâ€ line between yourself and your opponent. The objective its to shift the balance line in your favour for a certain number of turns. If you succeed, you’ll win the diplomancy challenge, gain diplomacy experience, and progress the particular diplomancy quest you are pursuing.

This whole diplomacy thing sounds a lot more complex than it really is, and when you first try it out it can seem confusing and intimidating. But the game does (in my opinion) a fairly good job of introducing you to the concept if you choose to complete the introductory quests in your starting area. And I was surprised that I personally found diplomacy to be pretty enjoyable. I should point out that I am not a person who normally likes non-adventuring activities like crafting or harvesting in a MMOG, so the fact that diplomacy was enjoyable for me says something about its design.

Vanguard also has all the things you’d expect of a â€œnewâ€ MMOG: top grade graphics, excellent sound, good chat/guild management tools. Stylistically, the graphics are reminicent of EverQuest 2 moreso than World of Warcraft. This means more â€œrealismâ€ than interpretive. However, I’d personally call Vanguard more artistic, but that’s purely a matter of taste.

Probably the most important visual mechanic within the world is the lack of distinct â€œzonesâ€. The world is essentially seamless: if you see mountains off in the distance, you can walk towards them and actually reach them without encountering a loading screen. Yes, there are â€œchunksâ€ (areas where you can feel the game pause for a moment), but no sense of the world being a bunch of discrete â€œroomsâ€ with distinct and limited doorways between them.

This goes far beyond simple zoning mechanics, however. I’ve found lately that all of the MMOGs I’ve played try to â€œchannelâ€ me in certain directions. In games like EverQuest 2 and World of Warcraft I regularly bump into 2 foot high â€œedgesâ€ that can’t be climbed, or small hills that become impassable barriers. At its worse, this starts to feel like my character is on rails: every road becomes a channel forcing me to follow some pre-ordained path. In Vanguard, if I figure I could climb it in real life, I can climb it in Telon. I regularly just go â€œexploringâ€ in Vanguard, wandering over hills and climbing mountains.

In conclusion, I think Vanguard definitely has merit. It has experienced some hiccups common with initial releases of new online games: performance issues, a few bugs, and some distinctly irritating â€œfeaturesâ€ (like my necromancer pet committing suicide every time I cross a â€œchunkâ€ line). If the folks I’m playing EverQuest 2 with suddenly decide one day that they want to try something new, I’d probably suggest Vanguard as a worthy alternative. On a scale of one to ten, I’d rate Vanguard as about a 7.5: pretty close to the same rating I would give for EverQuest 2 when it first came out.