Okay, so I’ve had a few too many “Second Life” posts lately. I’ll do my best to make this the last one for at least a few days.

The other day I bought my land- yesterday I put the finishing touches on my house.

I like the “rustic” look as opposed to the modern appearance many favour. The house itself is something I purchased at a shop.

I’ve also been working on the interior…

… and I’ve even had a house guest drop by for a visit.

Sydona is someone I met while wandering around one of the places new SL folks go to find free stuff. She’s been great fun to talk to, and I’m thankful I’ve had her company on several occasions. I’ve found that people in Second Life are generally kind and helpful- the game *is* the people, moreso than other MMOGs where there is a ton of NPC or monster bashing related gaming. As I said in my first post, I don’t honestly know how long Second Life will hold my interest- a lot depends on finding things to do that intrigue me, things that in this “game” are a lot different than in other online pursuits. Right now what keeps drawing me back is the “construction kit” aspect of the game, playing with the assembly of my house and such…and the long chats with Sydona about her interests and life…and mine, of course!

One other thing I found while poking around the vicinity of my home…a shark!

All he does is swim around in circles…and as I discovered, give rides 🙂 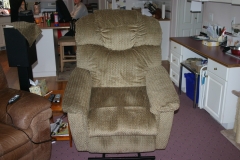