There is a lot of buzz in the on-line community lately about a “game” called Second Life. And not just amongst traditional gamers- there are folks within many big companies that are experimenting with this world which relies almost entirely on user created content. What’s the big deal?

I “get” the concept behind Second Life. Firstly, in essence it’s like a big playground. There are some basic physical laws, but no real “game”- instead, users can create their own content. Objects like a table, a chair…or even a pair of ears or a new face…heck, even an entire new body for their character to wear: all of these things can be created by any user. Objects a user creates can have scripted behaviors- a table could have a fold out extension, or those ears I mentioned could wiggle. Even more intriguing, an objects behavior could be based on something outside the game: virtual weather in an area could be based on real-world weather reports, for example- or a soccer ball could move based on telemetry from a real-world soccer ball.

Secondly, anything a user creates in Second Life is “theirs”. Unlike other games like EverQuest or World of Warcraft, anything new a user creates actually “belongs” to them, not to the folks who run Second Life. The user can copy, buy, or sell items as much as they want. Add to this the fact that in game money (Lindon dollars, or L$) can be bought for real world money via an official money exchange. So…if you are artistic, you could create a new painting for someone to hang on a wall in their virtual Second Life house (assuming they have a house…that costs money too), and you could earn a real-world living from it. Basically everything is for sale. People have bought Second Life “land”, subdivided it, and sold it out at a real world profit. Thousands of dollars of profit, actually.

What kinds of things can players make? Anything, really- cars, planes, helicoptors, horses. Houses, stadiums, entire islands. A mouth, an ear, different eyes, or sex organs. A tattoo, or a different hair style, or a dance animation. A completely new player avatar…it doesn’t have to be remotely humanoid- one I saw was a butterfly. A networkable vendor kiosk complete with financial management and automatic emails to the owner of sales status, or a security system complete with “repulsion fields” that can be attached to a home.
All of this is interesting enough, but is it a game? The game itself is free to download: you pay a subscription fee ($9.95 a month) if you want to own land, which at least to start is probably beyond most people. So I downloaded it and tried it out. My opinions? Well, I can see how people could get addicted to Second Life, even though I can’t really detect a “game” here in the traditional sense. Anyone who comes to Second Life expecting to go out and slay some monsters or something is in for a rude shock.

So what did I do in Second Life? Here’s a brief list: 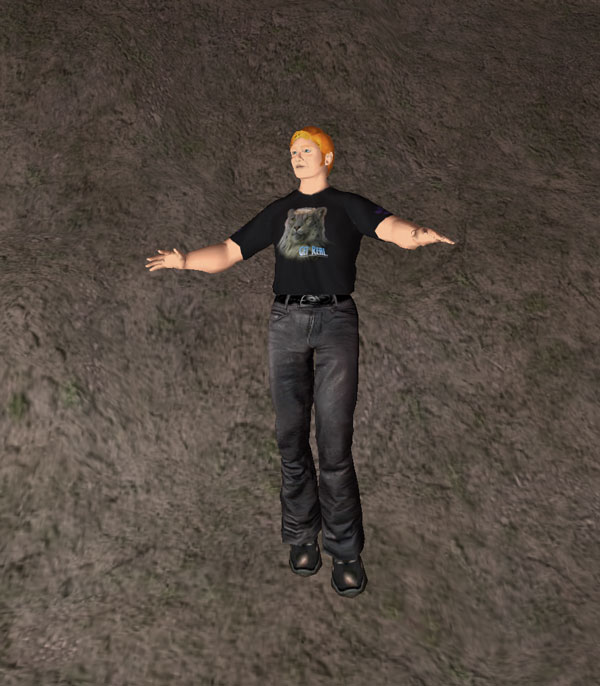 Netting it out…I still really don’t know if Second Life would keep me interested over any really extended period. A lot would depend on the social network that you build in the game, and I’m generally anti-social. Another thing that might keep me interested would be if I got involved in creating things…but from what I’ve seen, this market is flooded with highly talented people with lots of spare time. Making something purely for my own amusement would become boring after a while, and I lack the artistic talent to make the visually appealing things people would want to buy.

Second Life is an intriguing place. It’s not for your “average” gamer…I’d say its more appealing for people who might like the Sims, or who want a graphical chat program they can customize. People who partake of more free-form MUDs and MUCKs would likely find much to appreciate here. And, from the large selection of “functional” sexual body parts and animations that can be acquired, I’d say Second Life would appeal to people who enjoy pixellated sex.

But then I’ve barely even skimmed the surface- I’m sure there are much greater depths to be found in Second Life. I know some schools are using the “restricted” (PG/teen) areas for on-line education. I could also see businesses using Second Life for informal presentations for the same reason they have streaming videos of conferences: it “personalizes” things. Thus far it seems like whatever it is Second Life offers has attracted enough participants to make it sustainable, and that in itself is intriguing.

2 thoughts on “My Second Life “deflowering””