Steve Fossett, a millionaire who likes to break records, has successfully completed a flight setting a new world record for solo non-stop distance. His plane, the GlobalFlyer, was designed and built by Scaled Composites, the same folks who designed and built the first privately funded “space ship”, SpaceShipOne.

The flight itself must have been a bit scary. It started with a loss of something like 700 gallons of fuel. It continued through the fact that an environmental control problem raised the cabin temperature in the plane to over 130 degrees. And it ended when a generator on board the GlobalFlyer failed shortly before the scheduled landing, forcing an early emergency landing. Despite this, the record was set, and the designs of ScaledComposites got some additional well-deserved publicity.

An interesting fact about the GlobalFlyer aircraft. Apparently, it is so aerodynamically “perfect” for sustained flight that the only way to get it to land is to deploy parachutes. Neat… 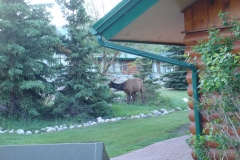