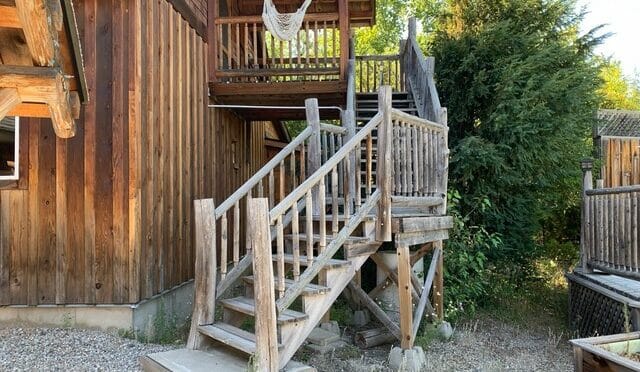 Why replace the stairs?

The suite over the garage that I’ve made into my office is accessed via stairs that are outside and exposed to the elements. I said ‘these need to be replaced’ the very first time I walked up them while viewing the property that became our home. I kept saying that for months after we bought the place.

The stairs are probably ‘original’, meaning they are something like 15 years old. As uncovered outdoor stairs, they are exposed to all the weather damage the Kootenays can deliver. But the real problem with these stairs is that they aren’t properly engineered. The footings are not ‘footings’ at all i.e.: the whole structure is sitting on concrete pads sitting on the soil surface. And the upper deck is supported on one side by six lag bolts i.e.: it has no support posts on the wall side at all. The entire structure ‘wobbles’ a bit when I use the stairs, and some of the railings would probably collapse if I gave them a good hard push.

I decided that the replacement would be engineered properly. And I wanted the design to include a full ‘roof’ over the stairs, top to bottom, so that the structure would be more protected from the elements. This means more engineering to account for snow load on the roof.

I could have started the whole process of replacing the stairs as early as March or April. Instead I waited… for no good reason. I suppose one excuse could be that I wanted the financial ‘dust’ to settle: selling one house and buying another with over six months of overlap was somewhat nerve-wracking for me. I didn’t feel like the money from the sale of our old house was actually ‘ours’ until it was sitting in our bank account.

All the money questions were largely settled by the beginning of July, and that’s pretty much how long I waited. I started looking for a contractor during the first week of July- I had a quote by August 3. It felt like enough time, but… apparently not. Once engineering started, a ‘process’ began- a process that is still not finished.

RDCK has its say

The Regional District of Central Kootenay (RDCK) gets involved on any ‘formal’ construction in the area. And engineering is ‘formal’, so we needed diagrams, engineering seals, and approvals. The engineering was done, ‘sealed’, and submitted to the RDCK by the beginning of October.

And that’s where it sits at the moment. Our contractor has been checking in periodically, answering any questions the regional district may have… but they have their own processes. I’s to dot, T’s to cross. The latest: the RDCK wanted measurements of distance to the property line to make sure the stairs aren’t encroaching on those boundaries. We are on an acreage: the property line is tens of metres away from the stairs. But the district has their process….

Overall, I’m pretty happy with the contractor (Gentry @ PNT Contracting) and the engineer (Dan @ WSA Engineering). I want this done right, and they are taking the steps, asking the questions, and making the observations I expected. Of course I wanted the stairs done for this winter, but delaying the process of picking a contractor until July means the ‘blame’ is on me.

There is still some waning hope that we might get the construction done before the ground freezes, but I’m not holding my breath. I’ve ordered some ‘anti-slip’ plates to put on the existing stairs, and I’ll be shovelling/salting each morning it snows. They’ve lasted this long- what’s one more season?

2 thoughts on “Stairs- maybe next year” 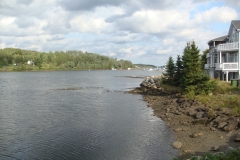