I set out in June of 2014 (June 28, to be precise) to meet up with my brother Colin for the second of our ‘annual’ motorcycle road trips.  The plan was simple: go to Yellowstone Park, and see what is to be seen.  A very rough map of the sites we visited (if not the route we followed… more details below) looks something like this: 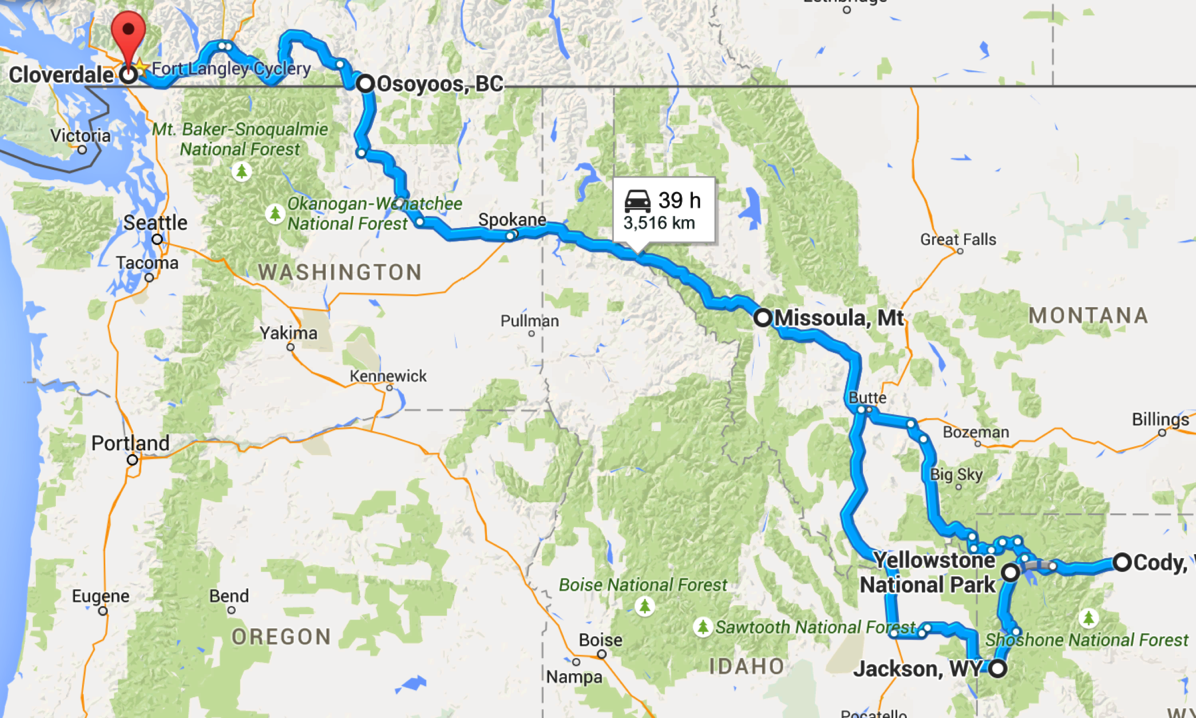 And now on to the details…

I mentioned to Colin at some point in our chats and emails after our 2013 road trip with our brother Ron that I’d like to go see Yellowstone.  Since Colin had been there before, he’d act as ‘tour guide’ and work out the details.  I contributed some research and made most of the hotel reservations for our journey.  Some of the key ‘milestones’ we decided we wanted to cover before we left (and some links we shared back and forth while discussing our plans):

We started talking about details in May of 2014 for a planned meet-up in Osoyoos on June 28.  As per usual, I went through a checklist of things to confirm before I set out.  Something that has become a bit of a tradition for me is to unpack my “preparedness” saddlebag on my bike, and make sure everything is still in order.  The review kind of looks like this: 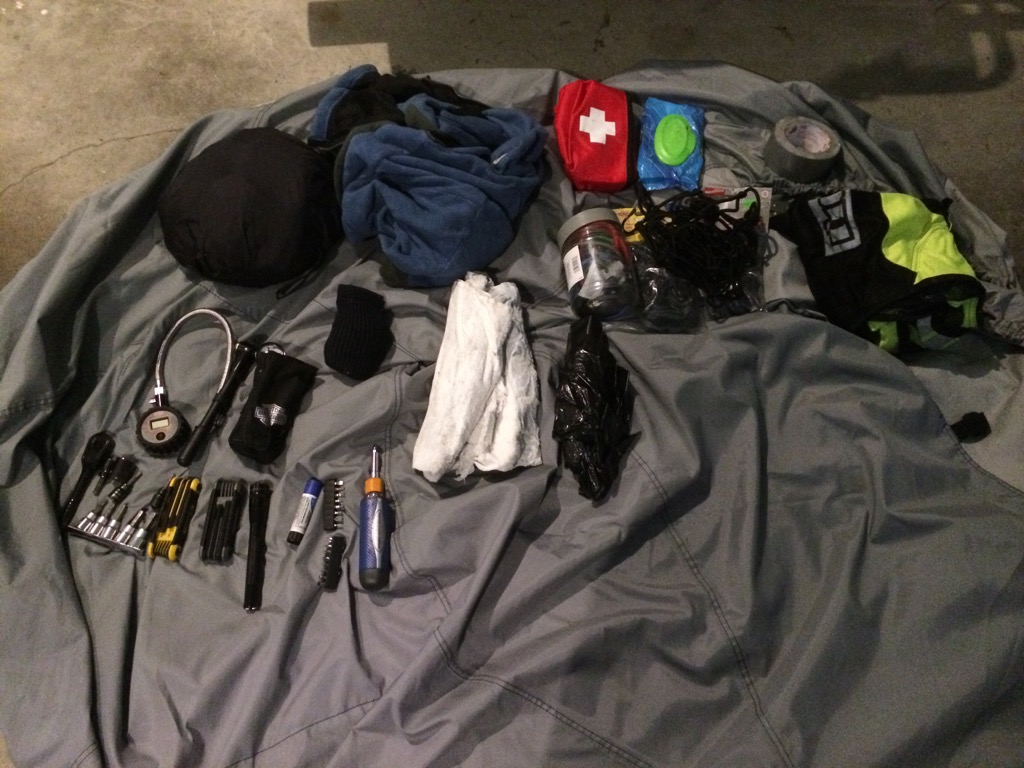 My “preparedness” saddle bag contents.  Hopefully I don’t need most of this stuff, but I carry it all the time
The kit generally includes these items:

I ride all year with this stuff in my saddlebag, and rarely even look at it.  But before a longer (multi-day) trip, I like to check and make sure everything I expect to be there is still in place.  Since this was a camping trip, I also had to check my camping gear.  Like my ‘preparedness’ kit, I almost never look at my camping gear, and it sits on a shelf gathering dust.  This included unpacking and re-packing my tent, mattress, sleeping bag, and even the odds and ends I need to make a cup of coffee in the morning. 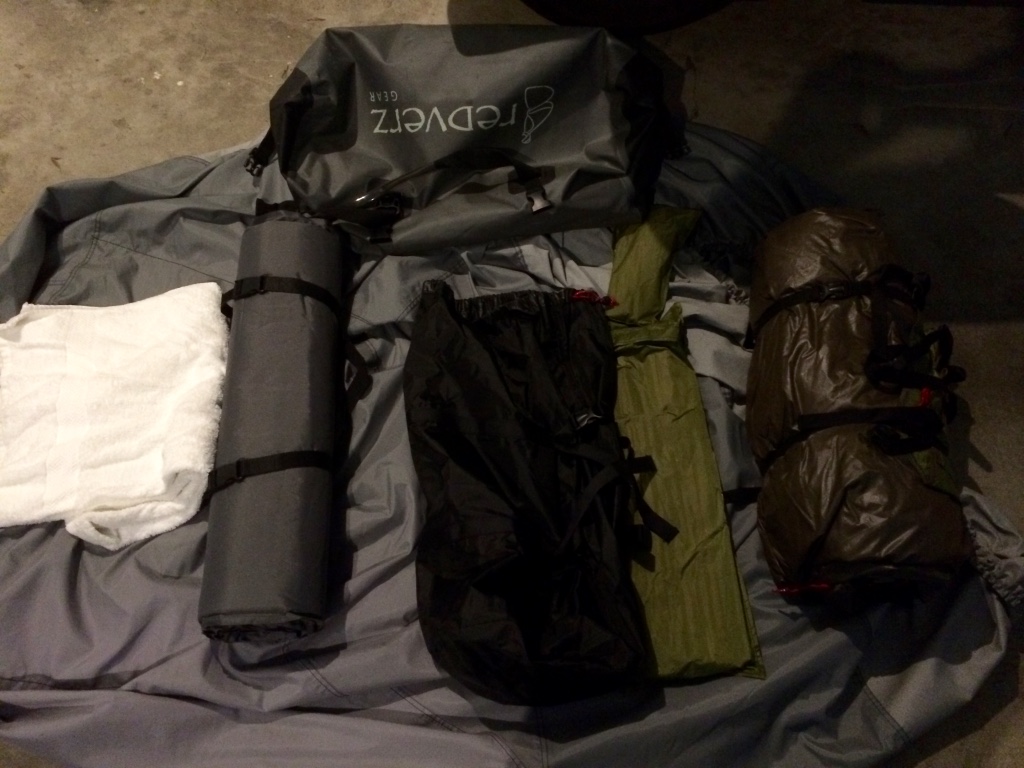 Reviewing and packing my electronics was another bit of preparation work.  I decided to leave my GoPro and all its associated bits behind, but this still meant having a camera, charging cable, GPS, GPS cable, etc etc.  Finally I packed my clothes and sundries.  During this whole process I thought a lot about simplification.  The camping stuff in particular was a chore, and if I ever plan on camping again I’ll be making some changes to ‘lighten the load’, both figuratively and literally.

The Death of a GPS

Just before I set out, I decided it would be good to update the firmware and maps on my Garmin Zumo 660.   After the firmware update, the Zumo rebooted and got ‘stuck’ at the ‘loader/loading’ screen.  This was the end of my Zumo…

Apparently, there was a bug in the firmware update.  A small (?) percentage of Zumo 660’s that installed that update were ‘bricked’ (made inoperable) to varying degrees.  Google search Zumo 660 bricked’ and you’ll find that I was not alone in this: apparently it was fairly common last year among owners of the BMW version of the Zumo 660.  Of those Zumos that were bricked, some were recoverable through a fairly time-consuming manual process, some were not.  Mine was one of those that was well and truly dead.  Of course, the  warranty had expired, and the service arm of Garmin wanted to charge me nearly $200 to ‘refurbish’ my Zumo.  I fought, and got ‘special permission’ to have that fee waived.  But there was no way I was going to have a GPS in time for my road trip.

And truth be told, a year later and I still haven’t exercised my option for refurbishment.  It feels like a hassle: I have to package it up and send it away, and 8 weeks later I’ll get back a working (?) 660- which is now five years out of date.  So instead I bought a new Zumo… but that’s a topic for another post.  The important thing here is that I ended up spending the entire road trip planning my route the old-fashioned way: with a map.  Fortunately Colin had a working GPS on his GoldWing…

I met Colin in Osoyoos as planned, and after a night at the hotel we crossed at the Nighthawk crossing. 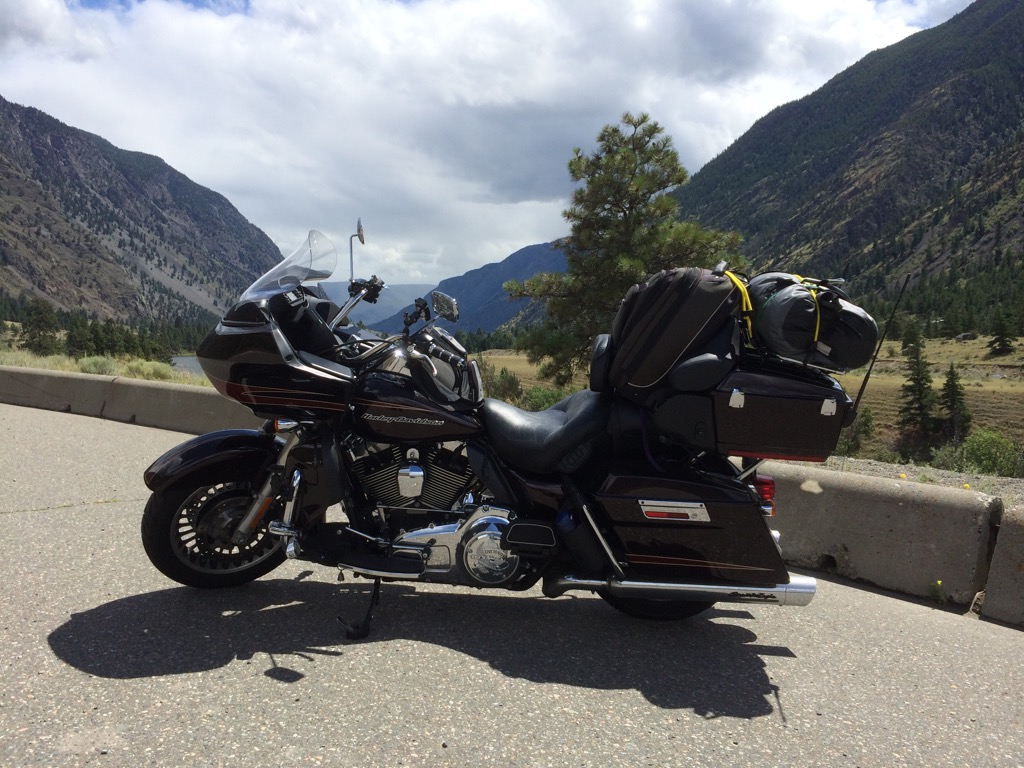 On the way to Osoyoos, first day of trip

The Nighthawk border crossing was probably my only disappointment of the trip.  I had seen posts by others about this being a neat little border crossing, with so little traffic that it was somewhat picturesque.  Unfortunately, the Americans had to go and screw the crossing up, by ‘upgrading’ it with a fancy new facility including (I kid you not) a radiation portal monitor, bullet proof walls and glass, and drive through inspection bays.  In order to enhance their sense of doing something important, the inspectors actually had me unpack my bike.  Anyone who has ever packed a motorcycle for two weeks of travel knows that this is a huge production, and I was literally ready to strangle the customs inspectors.  Thankfully I didn’t, as I’m pretty sure that would have only served to complicate my border crossing… 😉 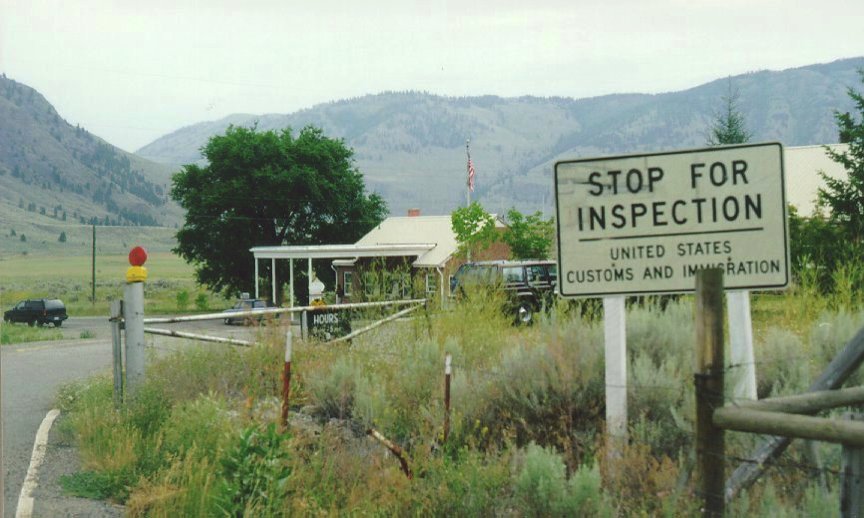 This is what the Nighthawk crossing used to look like 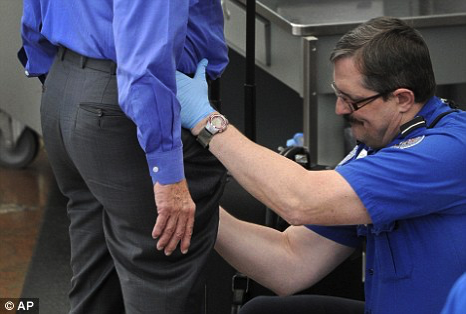 And now it looks something like this (slight exaggeration)

The guards were polite enough, and of course I understand they have a job to do.  And it’s a job that often isn’t much fun.  But I loved (sarcasm) being repeatedly asked why I was crossing at ‘this location’ (Nighthawk).  They seemed to accept my response (‘because the road on the U.S. side is nice for motorbikes’).  And when they asked me to unpack my bike, I said (paraphrasing) ‘just so you know, this is going to take a while’… their response ‘we have all day’.  Gee, thanks 😉

Once across the border, though, we had an excellent ride.  The highway beyond the Nighthawk crossing on the U.S. side is lovely for motorbikes: twisty and largely undeveloped.  I enjoyed that part, and it was a great stress relief after the security theatre at the border crossing itself. 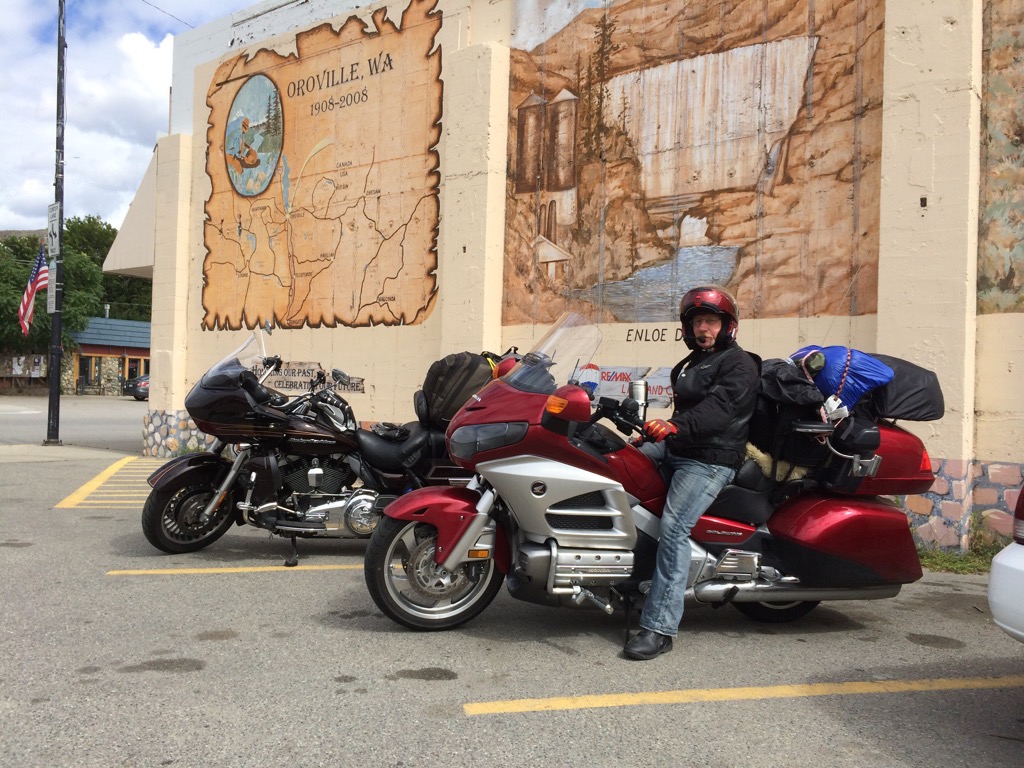 Later in or first day of riding: Oroville, WA

My recollection is getting a bit hazy, but I recall our first “on the road” destination was not actually where we ended up stopping.  We got caught in a bit of a rain storm, and decided to stay in Sandpoint, ID.  That turned out fortuitously, as Sandpoint was much nicer than Colin had remembered… especially after riding in the rain for several hours. 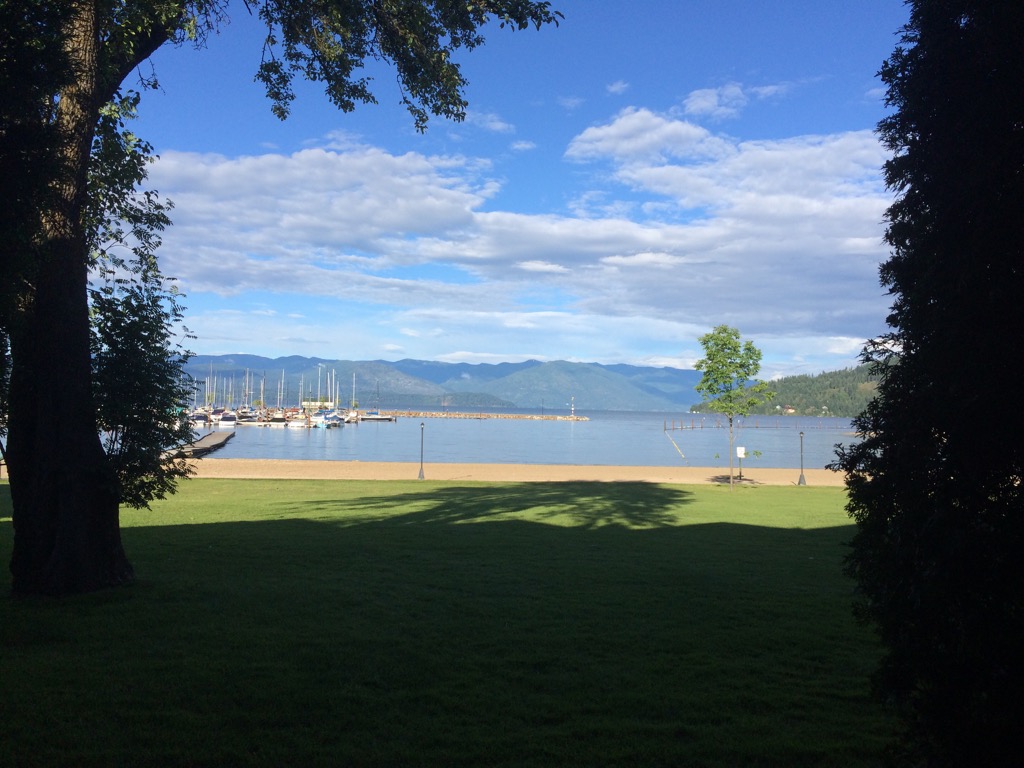 The view in Sandpoint: Lake Pend, if I’m not mistaken

July 4 is an American holiday…

We didn’t book our camping spot in Yellowstone park in advance: Colin told me that wasn’t necessary, and I accepted this.  We arrived on June 30th, just a few days before the U.S. July 4th holiday.  Booking campsites in advance is (surprise!) kind of necessary in the week before/after July 4.  The few spots available are generally gone by very early in the AM after the site offices open… and we arrived in the afternoon.  Oops.  We got lucky, though, and managed to acquire a camping spot for one night at the Bridge Bay campsite, with the rest of our stay arranged when we got to the park office early the next morning. 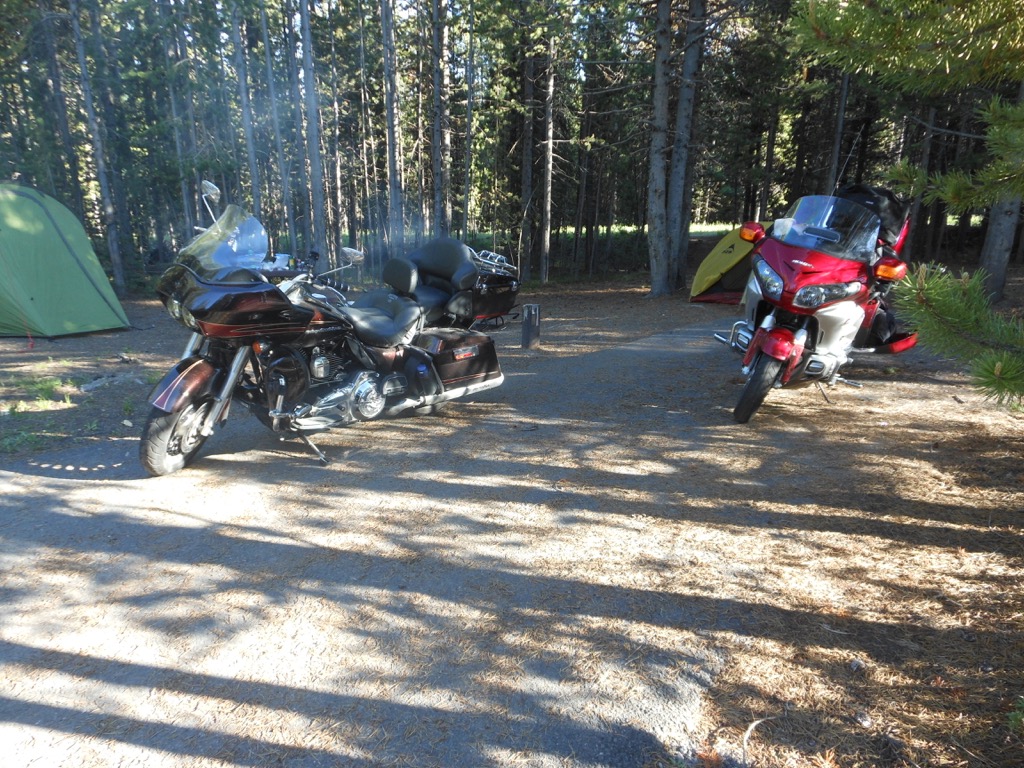 You can watch a nice little overview video about camping in Yellowstone here.  The part where the narrator mentions bringing warm clothes even in the summer is worthy of additional comment.  The night we spent at the Bridge Bay campground was one where I definitely felt the value of this advice.  The entirety of Yellowstone park is about 7-8,000 feet above sea level, which means it gets cold fast at night.  Because Bridge Bay is right on the water, it gets even colder.  The temperature was in the mid 30’s celsius during the day, but dropped to probably 5 degrees at night.  At first this felt like pleasant relief from the heat of the day.  But as the night wore on I discovered that my sleeping bag did not handle near-freezing temperatures well.  I spent an uncomfortable night trying to stay warm, even though I was fully dressed inside my sleeping bag.  I never imagined I’d need a freezing-temperature capable sleeping bag in the midst of summer: lesson learned.

For folks who don’t know, the entirety of Yellowstone park is basically one gigantic volcano.  I found it somewhat surprising to hear people visiting Yellowstone who didn’t seem to understand this, asking questions out loud like “I wonder why there are so many hot springs/geysers here?”.  The fact that visiting Yellowstone means standing on one of the most comically huge volcanic fields ever to exist on Earth is one of the main reasons I wanted to go there.  Keeping awareness of that fact in mind made looking at the evidence of current activity like the geysers that much more intriguing.

It is also kind of interesting to me that, pretty much only a week or so after we left one Yellowstone, one of the roads we had driven on ‘melted’.  A hot spot had moved to the surface underneath the road, and started to heat the ground and asphalt from underneath.  Apparently this is a fairly common occurrence in the park, as is repairing and relocating roads due to such activity.

One thing to remember while riding in Yellowstone: this place is home to some very large wild life, including some reasonably large herds of bison.  Colin and I encountered a number of small groups of bison, and in two memorable instances were variously chased by them or got to experience the joy of being faced down in a snorting display.  The bison do not fear humans, it seems, and on a motorcycle you are extremely exposed to all that angry beef.

We left Yellowstone on a route that took us down the famous Beartooth Highway, one of only 32 stretches of highway officially designated by U.S. Congress as an “All-American” road.   I have neither photographs nor video of our journey down this road, but it was beautiful and definitely worth going out of your way for.  Our destination that day was Cody, Wyoming, on our way to our last objective: Grand Teton Park and Jackson aka Jackson Hole, Wyoming.

Colin and I left Jackson together, and parted ways in Idaho after our time in Grand Teton Park. 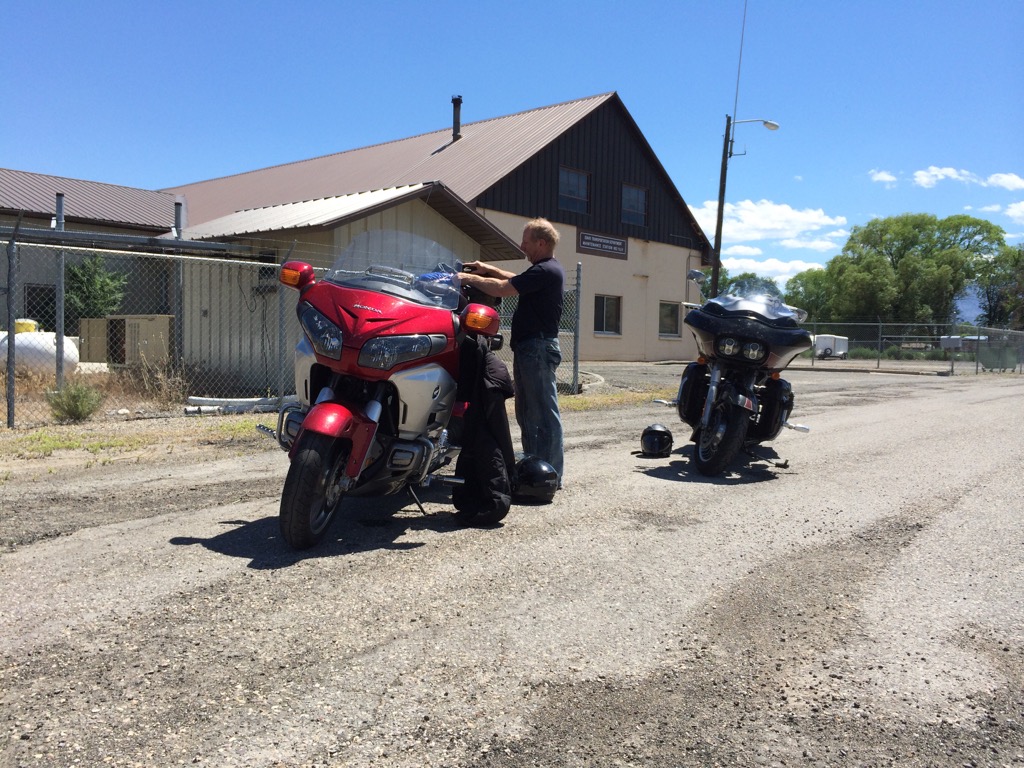 From there I travelled a more or less direct route home stopping in Missoula, MT and Osoyoos.  I was no longer really touring: instead, I was just riding, happy but tired and starting to look forward to sleeping once again under my own roof. 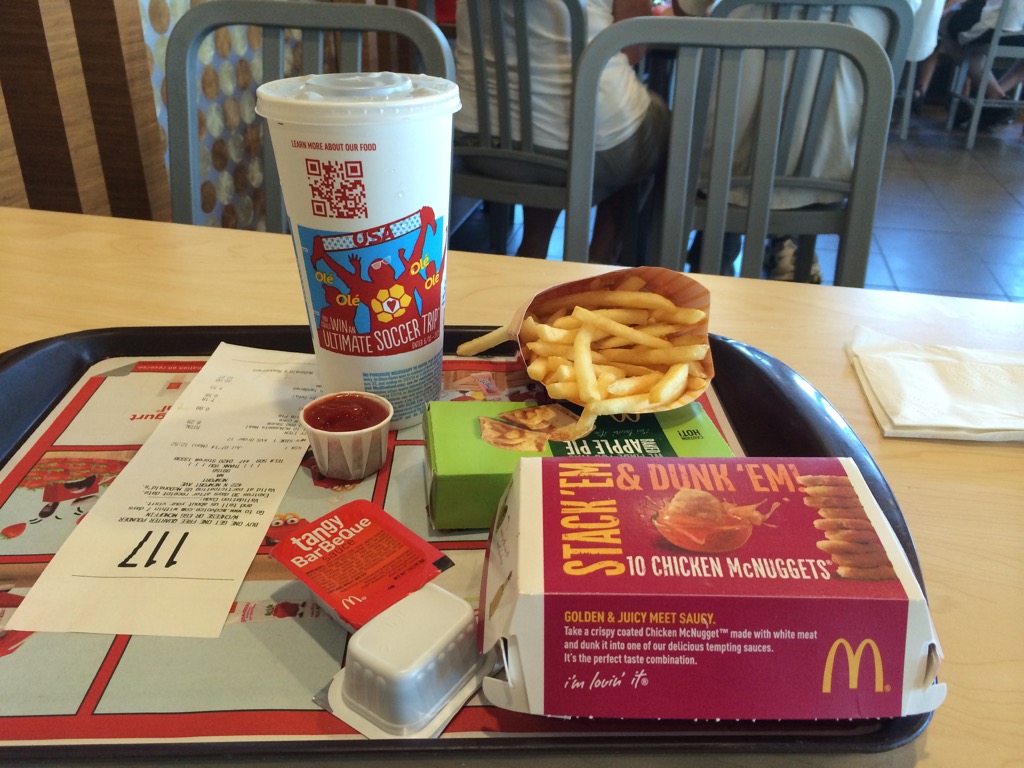 This is the way I often eat when I’m riding… I’m not very adventurous when it comes to food!

I saw the largest active volcano system on the planet, shivered in the wee hours while camping next to that volcano’s caldera, and finally saw Old Faithful in person.  I experienced one of the most beautiful highways in North America, watched my brother play chicken with bison, and learned that the town of Jackson isn’t a hole, but it is in one. It was a great way to spend a week or two, and I heartily recommend a visit to the area if you haven’t already gone yourself.