Avon sells some fairly decent grips and accessories for motorbikes.  I liked the feel of the Air Cushion grips, but bought them before they had the option of a throttle boss.  Recently, Avon started selling the throttle boss separately, and I ordered one on-line.  Unfortunately, it wasn’t at obvious how to install the thing… 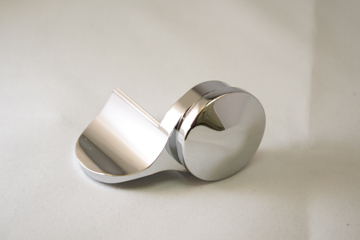 I tried turning the end cap from the outside, and with some force it moved.  However, there was no sign of loosening, and I feared breaking it if I continued.  Since this was all taking place a few days before my week-long riding “vacation” with my brothers Ron and Colin, I decided I’d leave things alone for the time being.  It would suck to break my throttle / grip just before a road trip.

Now that my brothers are on their way home, however, I decided it would be worth while looking at the grip again.  It seemed reasonable that the end cap was held on inside by a bolt or screw.  To get at the theoretical screw or even confirm its existence, however, would require removing the entire throttle grip.  Since I have never done this before on my Harley (I had the Avon grips installed by the shop), I went searching for some instructions for at least this part of the process.  I found an excellent video on changing your grips on Youtube (thanks, J&P Cycles):

This gave me one big piece of handy info: since my bike (a 2011 Road Glide Ultra) has fly by wire throttle, removing the throttle grip and replacing it would be easy.  As I discovered, only two bolts at the top and bottom of the throttle housing need to be removed to free up the grip: 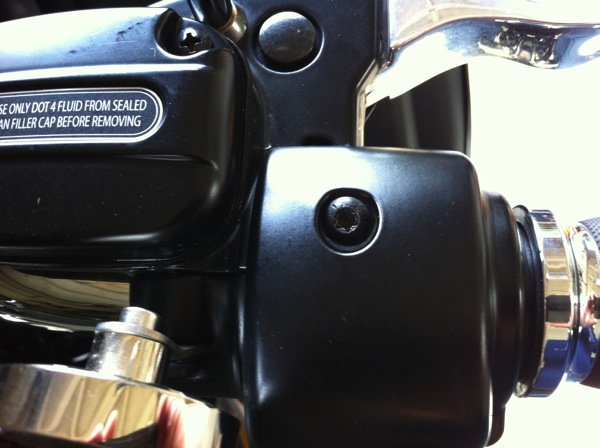 Top bolt: there is an identical one on the underside of the housing, diagonal to the top bolt

These are Torx bolts, T25 size.  Once removed, the throttle housing is in two parts but still “linked” with wires: I just very carefully opened the halves until I could pull the throttle-side grip off.  It is held on entirely by the closure of the throttle housing.  Inside the grip itself was the expected screw holding the end cap in place.  One worry I had was that the end cap might have some mechanical function: e.g.: it might have the interlocking “gear” associated with the fly by wire control.  But in fact the end cap has no functional purpose at all: removing the screw- which was very tight on my grip- just caused the end cap to fall off.  I replaced it with the throttle boss, put some blue Loktite on the screw, and tightened it back on.

Re-installing the grip was easy.  However, again unlike Kuryakyn, once the grip is installed there is no way to adjust the position of the throttle boss.  Note that, in my experience, this adjustment is important.  If the boss is adjusted too low, you won’t be able to use it to hold the bike at speed without unnaturally bending your wrist.  Too high and it will both get in the way, potentially causing you to accelerate unexpectedly, and again put strain on your wrist in normal use.  So I’d suggest doing a bit of adjustment while the throttle cover is still loose.  You may still want to adjust it later, and that will be more of a pain than it should be because of this poor design. 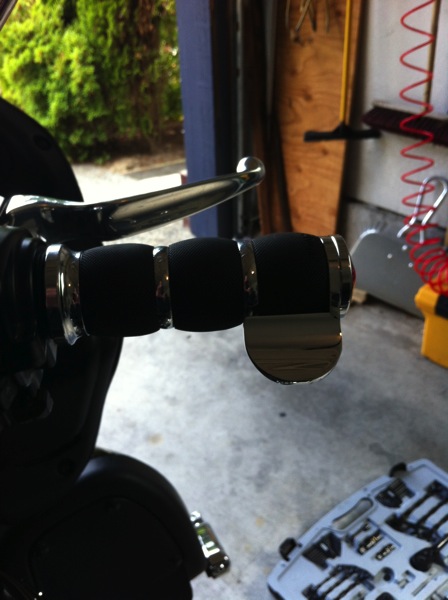