I was lucky to be able to enjoy a second “significant” motorcycle road trip this year.  My brother Colin and his son, Troy, came out to the coast from Alberta on their motorbikes.  Colin had previously ridden up the Sunshine coast and wanted to share that with us, and it sounded fantastic to me.  I asked Colin to be our road captain, since he knew the route and I don’t really care to lead unless I’m riding solo.  We set out on August 14th on a trip that ultimately looked more or less like the map below: 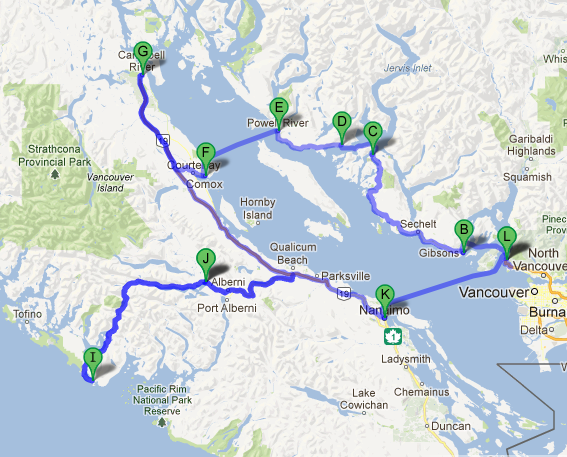 I had made a few last minute kit upgrades after one night camping on my previous road trip.  I bought a much higher quality “self inflating” mattress pad: it is both wider (about six inches wider, so I no longer feel like I’m sleeping on a surfboard) and much firmer.  The firmness means I don’t compress it down so that I’m sleeping on the ground.  And after consulting with Colin, I bought a miniature ‘Jetboil’ camp stove for making coffee.  I will attest to this being a great investment for anyone who desperately needs a cup first thing in the morning while camping.

On our first day, August 14, we travelled from home to the Horseshoe Bay ferry terminal, and caught the ferry from there to Gibsons.  This was my first trip with my bike on a  “big” (ocean going) ferry, and it was smooth as can be in part due to Colin’s familiarity.  He showed me where to park (although the Ferry traffic folks were pretty clear), and how to put the blocks under my bike:  just put the blocks under/supporting the frame opposite the kickstand, just enough so a bit of the bike’s weight is on the wooden block.  Again, pretty obvious once you’ve seen it done, but it was nice to have someone with experience show me how. 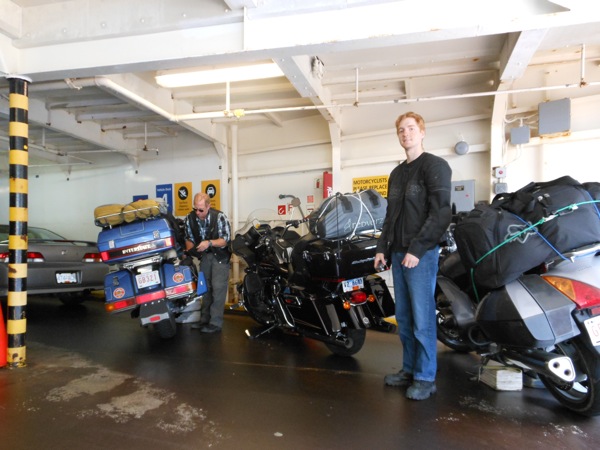 Colin on the left battening down his bike, Troy in the foreground.  My Road Glide in the middle…

From Gibsons onward, we were in new territory for me.  The ride up the coast to Earls Cove was beautiful, then we rode another smaller ferry from there to Saltery Bay. 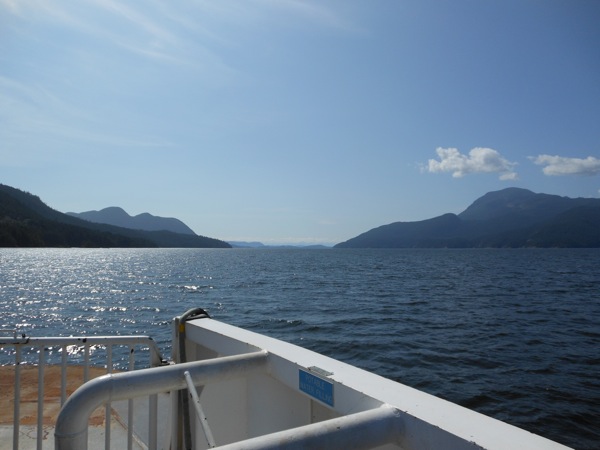 The view from the ferry from Earls Cove to Saltery Bay

Although it was still early, we decided to camp there at the Saltery Bay campground.  Like most of my motorcycle trips, I like to keep the riding comfortable, which for me means six to eight hours a day: stopping early is great!  We set up our tents, and as I recall, ate dinner at a restaurant not far from the campground. 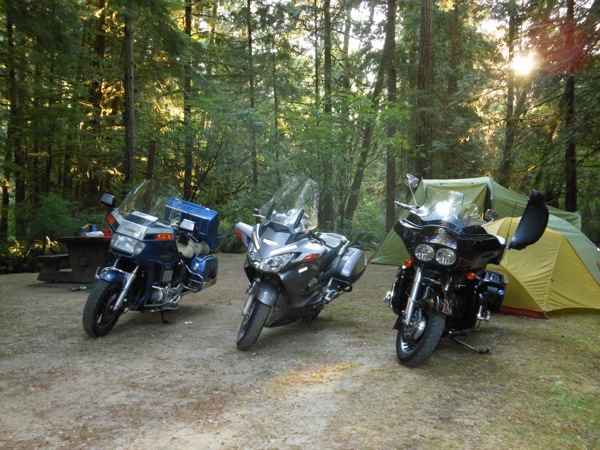 Our camp at Saltery Bay

We set out at a decent hour on our second day after enjoying a beautiful sunrise.  I must say that there is definitely something to be said for crawling out of a tent, making a cup of coffee, and walking out into scenery like this: 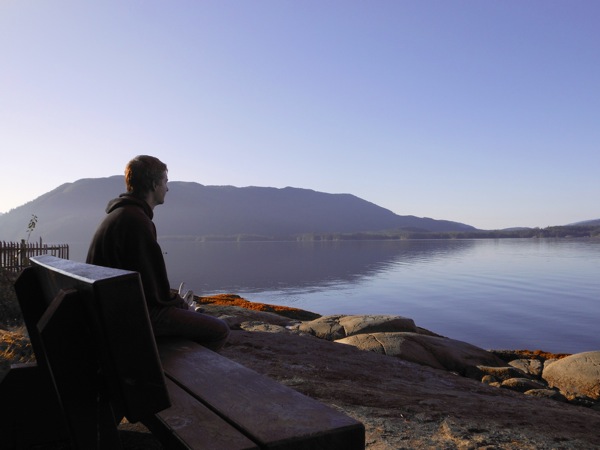 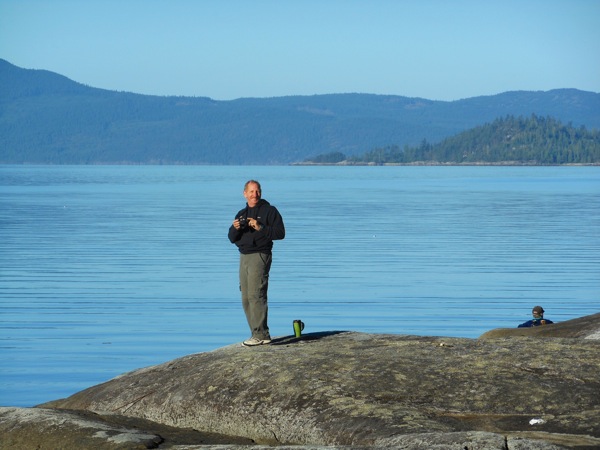 This is the way to start the day… Well, Colin is in the way of my view 😉

After getting our tents packed up and finishing our coffees, we continued on to Powell River along Highway 101 aka the Sunshine Coast Highway.  Apparently this highway is considered the same “highway” as Highway 101 in the US, and is described as continuing all the way to Chile in South America.  Unfortunately, this concept kind of breaks down in places as the 101 disappears in big cities like Vancouver- but it is a nice concept.  I would call the scenery here good, but not up to the same standards as the Oregon Coast portions of the 101 in the U.S.

We crossed the Strait of Georgia on the ferry from Powell River to Comox, and then finished our ride in Campbell River.  We decided to stay at a hotel in Campbell River so we could get showers and such, and ended up at the Best Western Austrian Chalet hotel.  The room was kind of interesting: a loft arrangement, with beds upstairs, and a couch / mini-kitchen downstairs.  The only real problem was a lack of air conditioning, which was challenging as the temperatures were in the 30 degree celsius range at the time.

We rode into the interior of the island and all the way to the west coast via the Alberni / Pacific Rim Highway on the third day of our ride.  This was the most beautiful part of the ride by far, particularly once we reached the MacMillan Provincial Park and Cathedral Grove area. 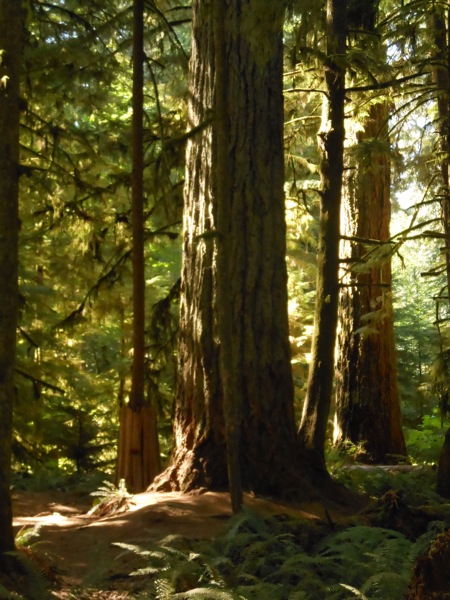 Walking amongst the giants…

Cathedral Grove is beautiful, and a bit melancholy as well.  There were once millions of acres of trees like this, and now only this tiny little dot of land saved by the whim of a forestry company that could just as easily have finished them off.  And nature itself has attacked the trees here, several times recently: hundreds were levelled in a wind storm a decade or two ago.  This, of course, is all quite normal, but when there are so few trees of this size left it is sad.  It’s a spot I plan on seeing again.

After enjoying the Grove we mounted up and proceeded through Alberni, arriving at Sproat Lake Provincial park fairly early in the afternoon.  We reserved our camp spot, but decided it was too early to finish for the day: we got back on our bikes and continued along the Pacific Rim highway.  The road from Sproat Lake to Ucluelet, our destination for a late lunch, provided a great combination of scenery, limited traffic, curves, technical challenge, and decent surface.  It was close to motorcycling nirvana for me.

In Ucluelet we decided to eat at the Canadian Princess Resort: a big boat permanently moored in the harbour with several “public” restaurants on board.  The food was good, the service friendly, but don’t expect a lot of room- although the Canadian Princess is a decent size ship, it is not like a modern floating hotel.

We rode back to our campground at Sproat Lake after dinner, enjoying the chance to re-travel the curves and see the scenery from the other side.  But it was another hot day: we struggled to cool off before getting to sleep. 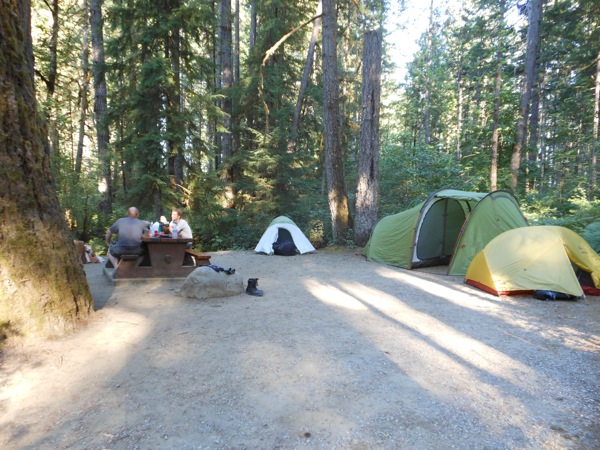 We walked to the lake… interestingly, the part of the campground we were at was on the “wrong” side of the highway from the lake, but they have a tunnel under the highway so you can make your way there.  I convinced Colin to soak his shirt in the lake to cool off and, seeing that he wasn’t attacked by any strange fauna, I did the same. 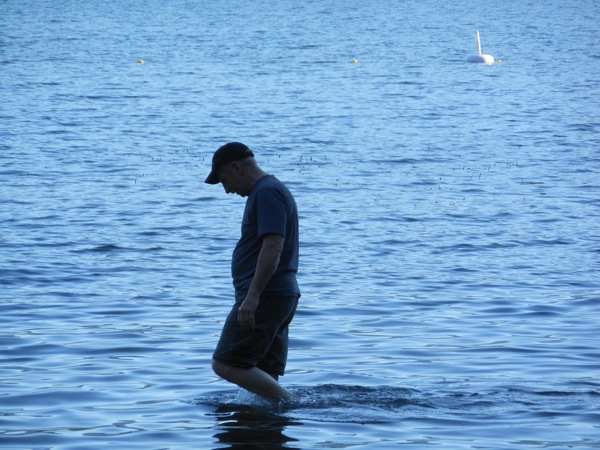 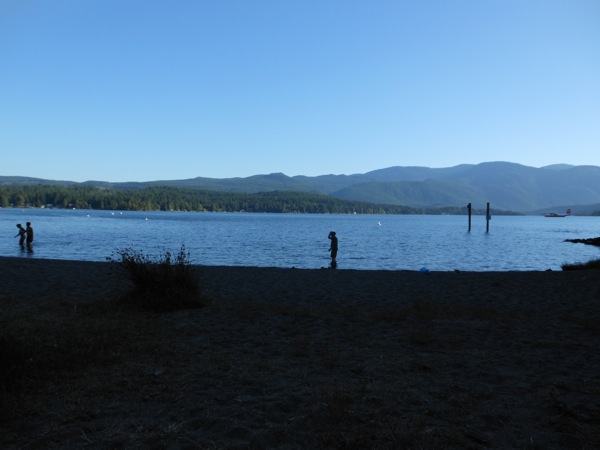 That night we drank beer, ate a bunch of cookies I had bought, and cooked a strange dinner that I can’t clearly remember now- I think hot dogs may have been involved.  I burned all of the wood we had purchased, cementing my role as our road trip’s official pyro.  I really enjoyed that evening, chatting and adding wood to the fire until the wood ran out… 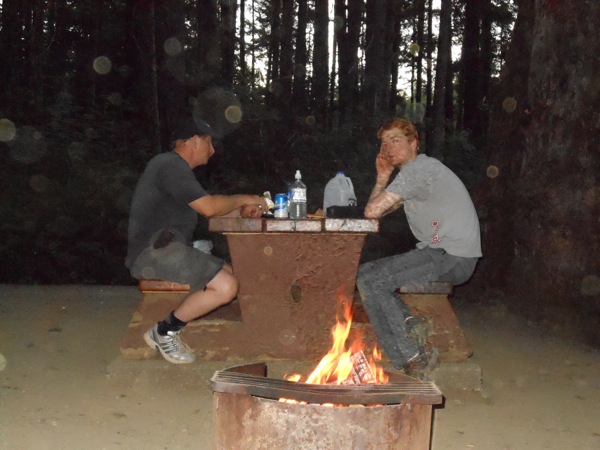 Day four was our last day, and mainly consisted of retracing our path east through Alberni.  Colin and Troy split off to visit their relatives on the Island, while I turned off for Nanaimo.  I crossed by ferry to Horseshoe Bay and then home. 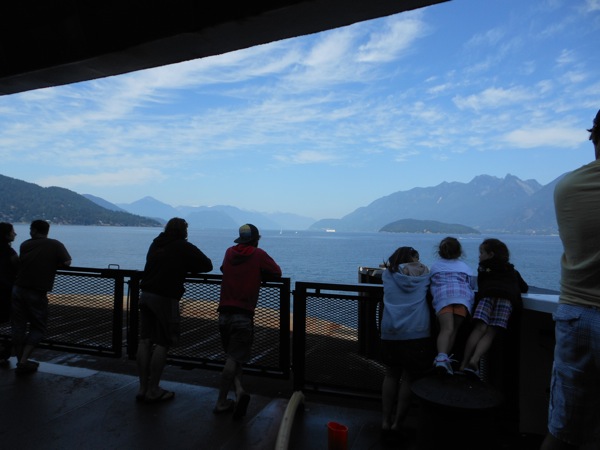 On the ferry, pulling in to Horseshoe Bay

My second motorcycle road trip was closer to home and shorter than my first.  But it was no less enjoyable: I saw parts of the coast and Vancouver Island that I had never seen before, enjoyed some truly excellent roads for motorcycling enthusiasts, and had a great visit with my brother Colin and nephew Troy.  I would happily repeat the trip, although I might like to try riding further up the west coast of the Island through Tofino, or possibly north to Port Hardy.  I’m lucky to have been able to enjoy such an adventure!