My first “real” (i.e.: more than one day) motorcycle road trip of 2012 began on July 30.  Myself, my nephew Shane, and our good friends Jeff and Tim set out on a journey to buy Shane a T-Shirt.  Yes, that was the only actual specific, tangible objective of the trip.  Everything else that happened was purely incidental… 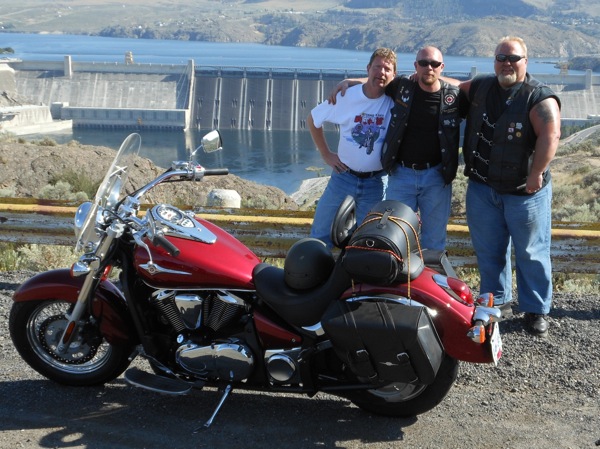 My travelling buddies at the Grand Coulee Dam

In all seriousness, there was more to the trip than buying an Extra Large Harley Davidson t-shirt for my wonderful nephew.  For starters, he wanted a t-shirt from Butte, Montana.  Why Butte?  Why not!  On our first day of travel we crossed the border and set our sights on Spokane, with stops along the way to see the Grand Coulee dam and the beautiful town of Concrete, Washington.  Our route looked like this:

I can happily recommend Washington highway #20 and #21: it has been a couple of months since the trip, but as I recall both highways had a lot of nice scenery and were far more interesting than taking a big interstate. 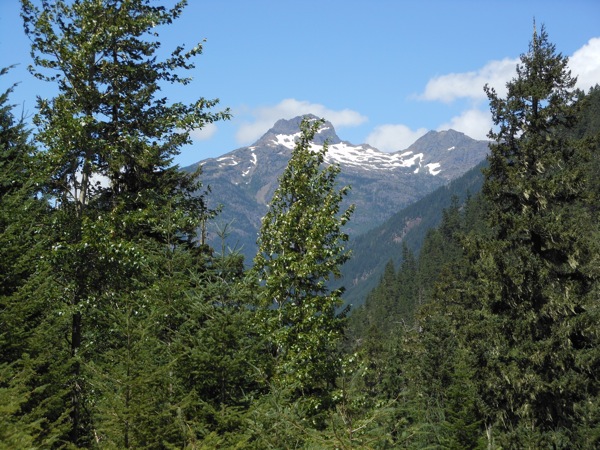 Concrete was not a town I would have normally thought of stopping at, but in truth it was actually kind of interesting.  Apparently it grew up around the construction of the Interstate highways, and was a clearing house/storage center for the primary material of the roads- concrete.  The name of the place is a bit spot on, but at least it is truth in advertising, right?  The abandoned concrete “silos” act as a good landmark. 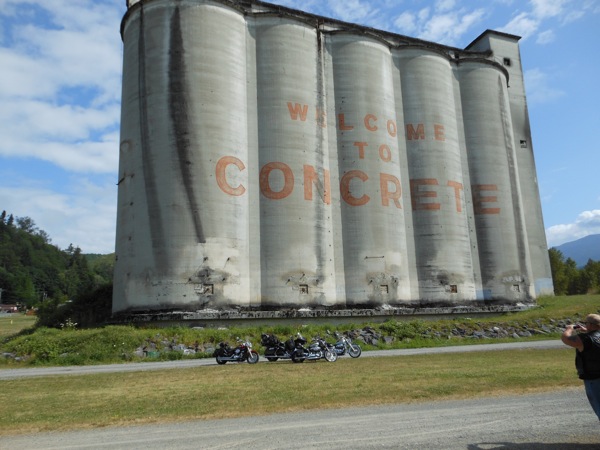 And of course there is the Grand Coulee dam.  Kudos to Jeff and Shane for turning off at the “right” place to get a good viewpoint.  We spent a good thirty minutes snapping photos and getting ready for the less enjoyable part of the ride into the lovely city of Spokane, where we spent our first night. 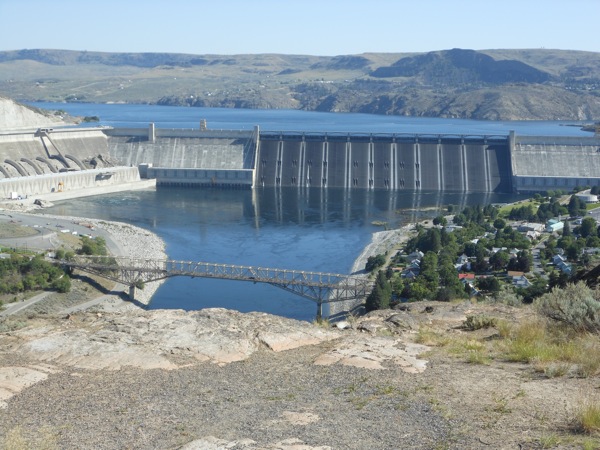 On day two we passed through Wallace, Idaho, a town that I truly enjoyed visiting.  They managed to save the downtown from highway construction (the I-90 is elevated over top of the town) by getting pretty much the whole downtown declared historical.  And I’m glad they did: the turn of the century wood frame “boom town” buildings are rare these days, and it really gives a sense of a different era.  We had what was probably the best breakfast of the whole trip there, not far from the Bordello museum (closed at the time we arrived) and the “Center of the Universe” (many thanks to Willy T Biker Gnome for his appearance in these photos): 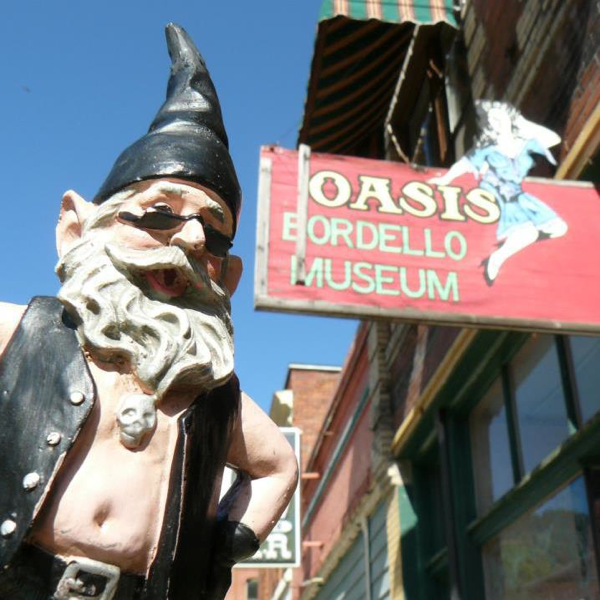 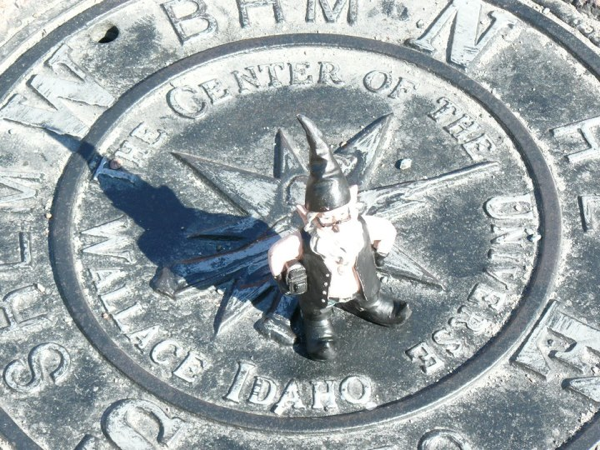 Willie at the center of the Universe

We then continued on into Montana, through Helena.  In Helena we stopped for “just a minute”, which turned in to much longer stay as Tim “Captain Gregarious” managed to get himself a tour of the capital building, including its apparently richly appointed … bathrooms. 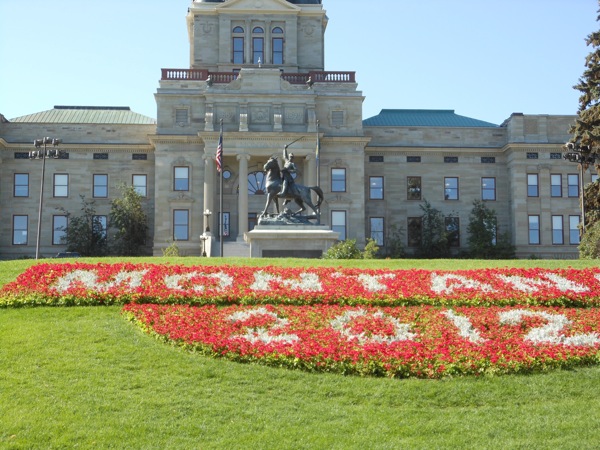 Shortly before we arrived in Butte, one of my recently installed highway pegs on my bike fell off… proving that yes, I really should have used Loktite.  Later in the day we arrived in Butte itself, the stated goal of our adventure.  There we stopped at Copper Canyon Harley Davidson, and Shane got his t-shirt; I picked one up too, as well as some Loktite and a replacement bolt for that foot peg that fell off earlier.  This was also where Jeff started having some problems with his motorbike not starting well and running rough, as if it wasn’t getting an adequate fuel mixture. 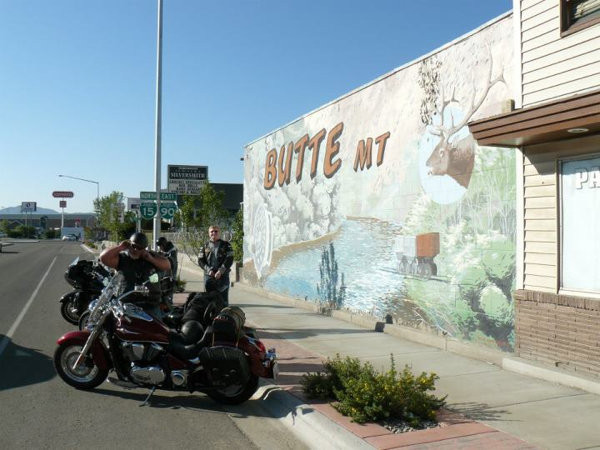 It wasn’t until the next day, however, that Jeff’s bike problems fully resolved.  We had only been on the road for a few hours before he flagged us over- his bike was running horribly, and the “starved of fuel” theory seemed most likely true.  We ended up stopping in Ulm, Montana– the main claim of fame of which, as far as I can tell, is that it isn’t far from Great Falls.  And Great Falls is, at least as far as we were concerned, distinguished primarily by the fact that it possessed a Kawasaki dealer: Sports City Cyclery.   Since Jeff’s bike is a Kawasaki, this was a godsend: Jeff was able to get a flatbed tow truck to transport his bike to the service shop.  We spent the afternoon enjoying Sports City’s hospitality while they worked on Jeff’s bike, and ultimately resolved the problem- a wiring short to his engine control computer.  Of course, fixing this was going to take a bit longer than a couple of hours, so we ended up having to stay overnight in Great Falls.

We had no real plans to stay in Great Falls originally, and so we were quickly apprised of some issues with trying to find accommodations.  First, we were arriving in town in the midst of something called “Montana Days”, or maybe it was the Montana State Fair: either way, it was in progress on August 2 when we were there.  Secondly, thousands of bikers were in the area on their way to Sturgis.  The result of these occurrences was that not a single room was available for over night accommodation in the entire town.  We verified this by calling a dozen or so hotels and motels, then sending Shane and Tim out to ride around randomly and bother hotel owners in person.

In the end, someone at the Sports City suggested we try the local Great Falls KOA– apparently, they had cabins for rent.  And amazingly yes, they did have two room cabins, available at a discount ($99 versus the usual $129) because they “Love Bikers”.  It turned out to be one of the funnest nights of my entire trip: we had pizza delivered to our cabin (!!), beer from the on site convenience store, and a great free musician performing at the campground’s cookhouse.  Air conditioning would have been fantastic (it was in the mid 90’s throughout this phase of my trip), and it was a couple hundred yard walk to the very deluxe showers/bathrooms, but you can’t have everything.  I have lots of memories of that night- the music, the jokes, Shane and Jeff giggling as they tried to fall asleep while remembering the various jokes and silliness of the day… 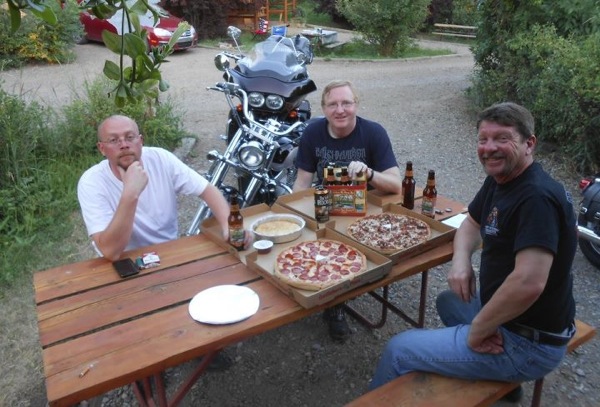 The next day we crossed the border back into Alberta, the weather turned foul, and at that point my path diverted from my friends.   They went west from Lethbridge, towards the Crowsnest pass, and I went north, towards Calgary and my eventual destination for this phase: Edmonton.  I really didn’t want to split up at that point- I was having so much fun riding and laughing with Jeff, Shane, and Tim.  The cold, wind, and rain seemed to set an appropriate mood for the parting. 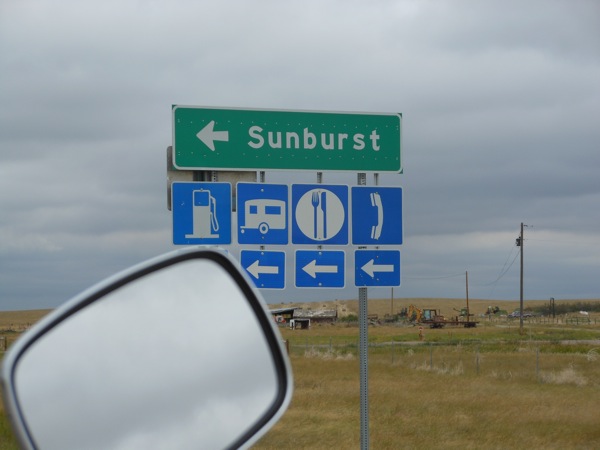 The weather in Sunburst is ironic…

The weather turned truly miserable once I was on my own.  It was as if nature was trying to hammer home the fact that one part of my adventure was over: I was blasted by rain and 100 km/h winds, lightening shot from the sky, and yet I pushed on.  I ended up not getting much farther than Airdrie, just north of Calgary, before I stopped.  But I felt like I had won some sort of battle, and the next day the weather relented.

I spent a couple of days in Edmonton, most of which was spent visiting my friend Chris and his family.  I miss that: only being able to get together once every year or so with a guy I used to see every few days is sometimes tough.  But we had a good time, and I think I’m still welcome in his house which is a good thing 😉

I went via Jasper and Banff, travelling down the Icefields Parkway, on the way home.  The scenery was amazing, and I saw more wildlife during my few hours on that stretch of road than I did during the rest of my trip combined.  If you don’t mind feeling a bit “isolated”, I can strongly recommend spending the extra hours to include Highway 93 North in your trip. 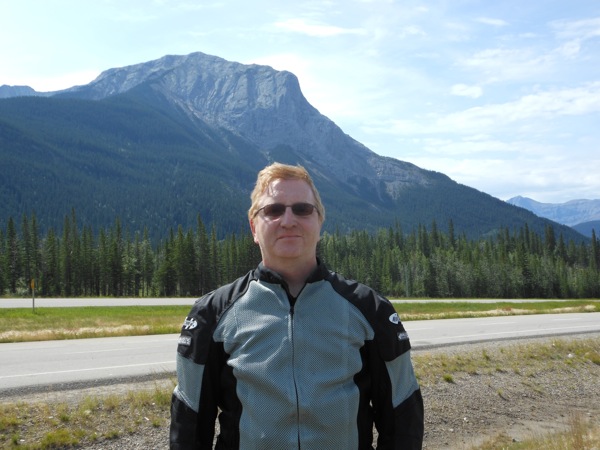 Me looking tired and dishevelled 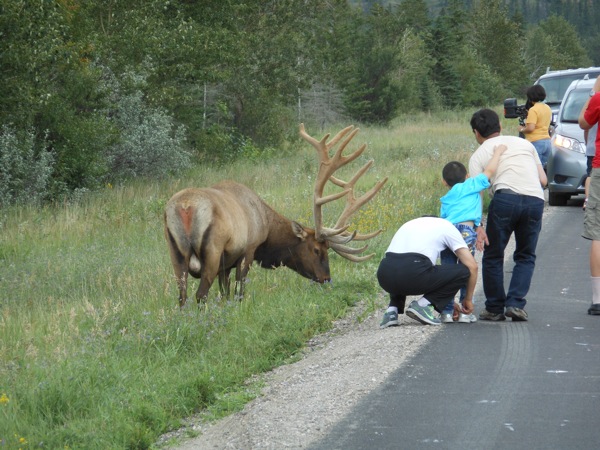 Yes, Junior, it is stupid to stand this close to a 1000 pound caribou… 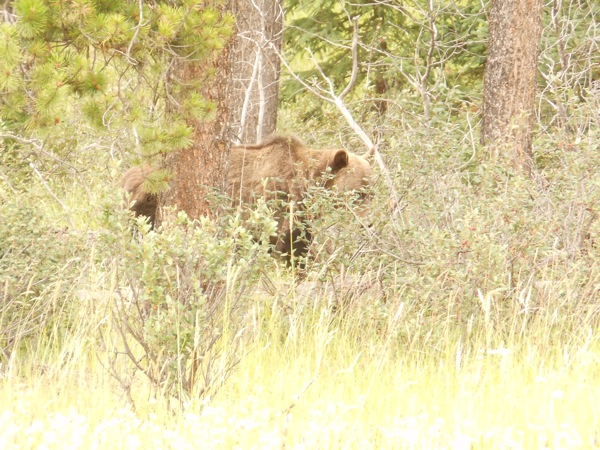 At least people weren’t feeding their children to this grizzly

My return trip weather was hot and sunny again, and my single day of camping during this trip was arguably less comfortable due to the heat than I might have liked.  However, I won’t complain- I’d rather be sweaty and uncomfortable than soaking wet and cold.  And at least I got a good chance to test-run the camping thing at a real park campsite, a place with no electricity, no cell reception, no wifi, and no pizza delivery.  It was nice, actually, and I was able to learn enough to refine my selection of gear for my subsequent tent experiences. 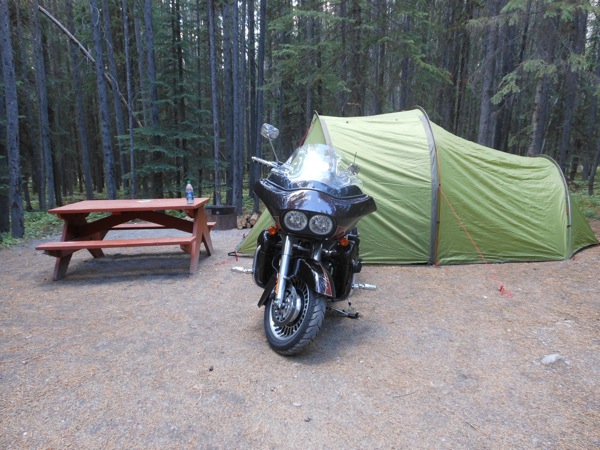 The final two days of my trip involved the Cowboy Trail (Highway 22) in Alberta, and the Crowsnest Highway (Highway 3) back home.  I enjoyed every mile I rode, but to be honest I was starting to get a bit tuckered out.  I pushed onward the last day rather than meeting up with my brother Colin and my nephew Troy to explore the West Kootenay area- getting a sleep in my own bed became that attractive to me.  I did stop briefly at the Frank Slide and at the Leitch Collieries historical site.   I was tired at that point, and spent nearly an hour stretching my legs and getting a second wind after a (relatively) short bit of riding that day- and I really enjoyed the displays there.

All in all, I rode over 4,500 kilometers and had a heck of a good time doing it.  My bike gave me zero problems, I had ton of fun travelling together with Tim, Shane, and Jeff, got in some visiting in Edmonton, and added a vast number of things to my memories of life.  What more can a geek on a Harley ask for? 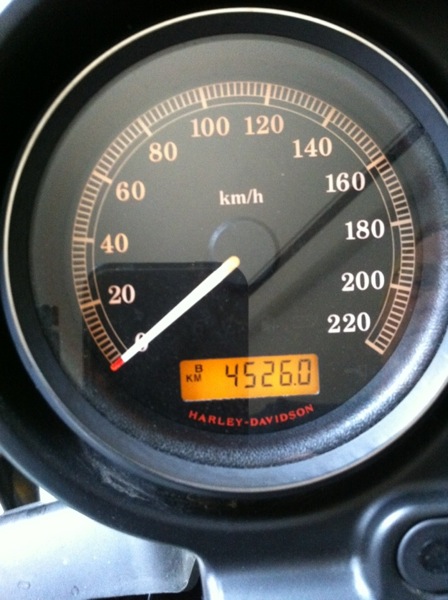 A few extra kilometres on the clock…