Holy crap there are a lot of bolts on this engine.  The oil pan alone has 11.  Most of them are hex wrench bolts of various sizes, while the fluid drain plugs are all 5/8 inch socket-type.  The first thing I did was find and check the obvious: the drain plugs.  Harley Davidson touring bikes have three separate lubricants: the motor, the transmission, and the primary drive.  These can actually be completely different types of fluid or, if you go the official HD synthetic, then it is just one kind.  The fluid leaking from my bike was very clean, which made me think it wasn’t motor oil- the motor oil gets some carbon from combustion, and the transmission and primary are generally “cleaner”.  In any case, here is the best picture I found on line (from the Harley Davidson forums– thanks, SOOS!) to help identify the drain plugs to a newcomer like myself: 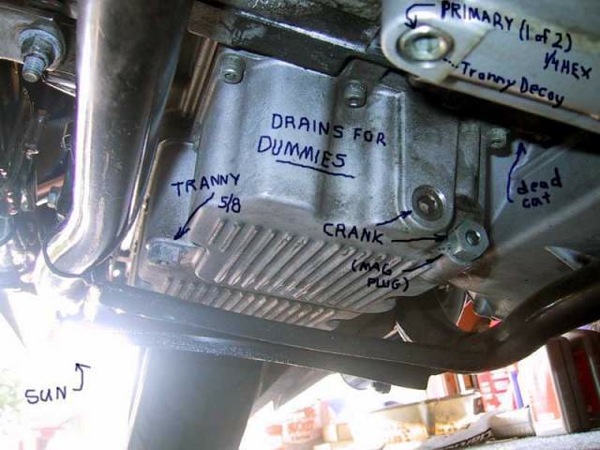 And no, Harleys don’t come equipped with dead cats 😉  The drain plugs on my bike were fairly snug, but I was able to easily snug up the primary and transmission plug a bit without much effort.  That had no impact on the dripping.  Then I looked at all of the oil pan bolts.  Some of them are nearly impossible to reach without a longer hex tool than I own and the bike on a lift, but I did the best I could.  A couple of these bolts were also not super tight, so I tightened the ones I could reach a bit as well.  Still no impact.  I washed the bottom of the engine again and drove some more.  I could definitely see that clear/clean fluid was collecting on some of the oil pan bolts, but those were the ones I had tightened: the fluid was coming from somewhere else, and propagating across the bottom of the engine, masking the true source.  I basically stopped actively looking, expecting the problem to be solved when I took the bike in for service next week.

I, however, don’t give up easily.  Problems like this nag at me, so I kept a paper towel under the bike in case drip patterns might give me a clue.  And I checked each morning.  On one check, I really looked closely at the transmission side of the engine.  There are a ton of bolts there, too: the transmission cover has eight, and then there is the housing to which it is attached, which has another… just a second.  There are six obvious bolts on the housing, and two on the bottom that hold on the muffler bracket.  Those two on the bottom are almost impossible to get to, as illustrated in this photo: 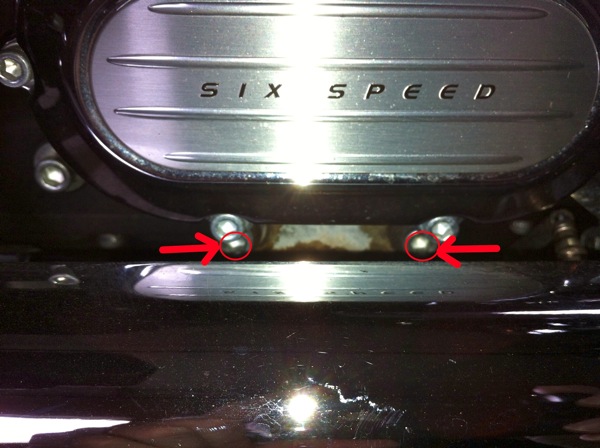 I was barely able to squeeze my finger in to touch these bolts, but they were so loose that they were wobbling.  Not only could I spin them with my fingers, but they were almost ready to fall out.  None of the tools I had could reach them, so I did my best to tighten them with the tips of my fingers.  Could these “muffler bracket” bolts be related to my leak?  Surprisingly, yes, because they don’t just hold the muffler bracket on- they are two of eight bolts that hold the transmission bearing cover on as well.  Here’s a Harley Davidson service notice (#M-1305) regarding torquing these and other bolts, and here is an image from that bulletin with the specific bolts highlighted: 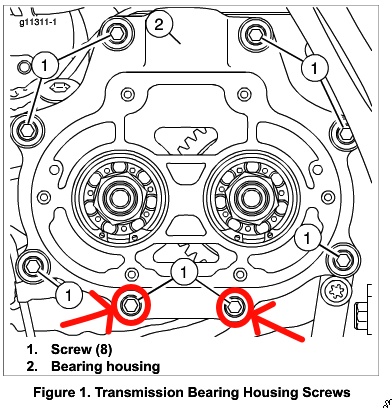 So the same bolts that hold on the muffler bracket also participate in holding on the transmission bearing housing, and these bolts were almost falling off.  Armed with this knowledge, I did some Google searching and found that I was not alone in experiencing this issue.  Apparently it is a fairly common problem with Harley touring bikes.  I ran my bike over to Barnes Harley Davidson, and they fixed it right away.  Interestingly, they had to pull the muffler to get at the bolts, and in doing so discovered that the welds on the heat shield of my muffler had given way.  The heat shield had to be replaced as well.  All of these muffler related shenanigans possibly answer another curious thing I had noticed during my last long ride: there was a tiny amount of extra hum or vibration at around 3500 RPM.  That was probably the loose muffler getting all resonant on me.

Everything was fixed under warranty, no cost to me, no harm done to the bike other than the oil mess.  And after 24 hours, no new drops of oil on the paper towel under my Road Glide, so it appears (fingers crossed) that the problem is resolved.  I could certainly argue that the idea of mounting a high-vibration component (the exhaust support bracket) on some of the same bolts that hold the transmission sealed is a bad idea.  A simple fix for HD would be to create a new attach point for the muffler bracket, an attach point with no mechanical purpose other than holding the bracket.  Then if those bolts get loose at least there would be no leak.  That would probably require an engine casing design change- if that’s too hard, maybe mechanically isolate the bracket from the muffler using some sort of rubber fitting so that the vibrations don’t loosen the bolts.  I’m no engineer, but you’d think these things could be done fairly easily.