It occurred to me shortly after I bought my first motorbike last year that video taping my rides might be kind of interesting.  I started investigating the various options, ranging from duct-taping or velcro-strapping an off-the rack home video camera onto my bike, through custom-built video rigs specific to motorcycling.  What I settled on was probably overkill for my needs, and turned out to have some unexpected frustrations: the Race Optics EVO-HD Camera system. 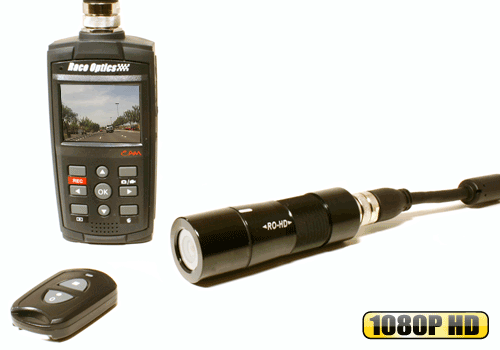 Looking at the options

I more or less rejected the idea of jury-rigging a home video camera attachment onto my bike right from the outset for two reasons.  First, motorbikes are tough on electronics: exposure to the elements, vibration, and shock will take years off the life of any standard camera, to say nothing of immediately voiding any warranty.  Second, anything attached to a motorbike needs to be fastened securely: unless it has proper mounts and fittings, it can become a distraction at best or a projectile at worst.

Googling motorcycle-specific video cameras leads to a lot of helmet mount gear which, although interesting, isn’t really very appealing to me.  I am less interested in the gritty realism of jerky and sudden angle changes and re-orientation than I am in getting some nice looking video.  Also, I have no particular desire to add a piece of equipment to the top of my head: I don’t have a practical reason for this other than imagining how silly it would look when I have to get off the bike at some point.

For the longest time, the only choice that looked like a fit for what I wanted was the the GoPro HERO line of cameras.  These highly rated sports cameras are supposedly durable and well-designed but, no matter how many times I looked at them, the design just didn’t appeal to me.  The camera is an all-in-one unit, with recorder, lens, and display in what looks like a traditional “point and click” camera body.  Finding a place on my bike to place it would be hard.  The handlebars wouldn’t work on a full-fairing bike like the Road Glide, and mounting it on (say) the highway bars would mean effectively having to dismount to stop and start the camera.  If the camera could just be remote from the recorder/control unit, that would solve my problem.

Early this year I came across the Race Optics product, which looked like exactly what I was wanting.  The camera and recorder/control unit are separate components, meaning the controls can be located somewhere convenient while the camera head is positioned somewhere that it can actually capture an image.  After much pondering, I finally decided to take the plunge in late March and ordered the EVO-HD kit along with a 32 GB SD memory card.

What I got in the box

The EVO-HD comes nicely packaged and more or less complete, at least on first glance: 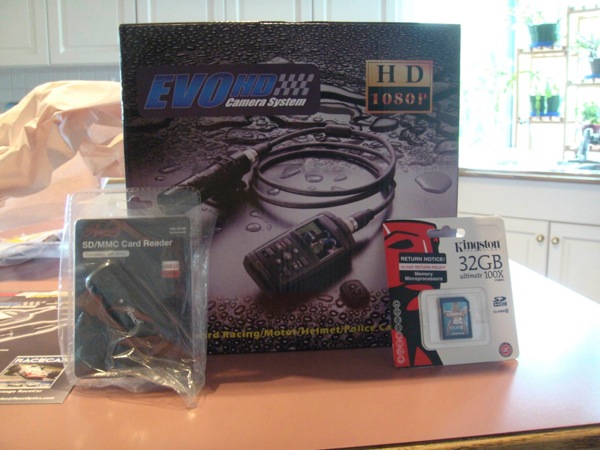 Inside the box is a nice, fitted case with all the miscellaneous pieces: 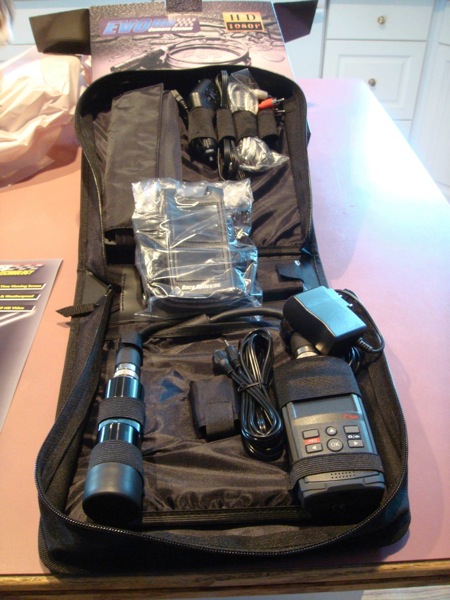 There are lots of accessory cables, two batteries and a charger, an adapter to connect the SD card to a computer’s USB port, a few simple mounting brackets, a wireless remote, and a case for the recorder with velcro straps.  In total, it seems like a worthy collection of components to cover all of the basic mounting, recording, transfer and playback needs.  Everything is well made, especially the camera head itself.  This piece is constructed similarly to a Maglight, meaning it is heavy anodized aluminum.

All of this heaviness and the multiple components present a downside if you are planning on mounting the camera on a helmet and, say, heading out for a day of snowboarding.  That’s why I’d suggest this is the wrong camera for that kind of purpose- instead, a small helmet cam or the GoPro camera I linked to earlier is a better choice if you want a “human mounted” camera system.  In my case, however, it is going on a motorbike, and I’ve already indicated helmet mounting is not my desire.  Which leads to a couple of my gripes regarding the EVO-HD.

The remote that isn’t

One thing that really attracted me to the EVO-HD was the inclusion of a remote control to stop and start the camera.  I imagined this would be ideal: I could mount the camera head, and place the recorder in a concealed location such as perhaps in one of my fairing compartments.  Then I could mount the remote control on my handle bars to easily stop and start the camera without having to place the recorder in harms way.  Unfortunately, the folks at Race Optics neglected to prominently mention one flaw with their remote- it is an infrared, line of sight only device.  I have no idea what the point is of such a remote, given that it has to be pointed at specific point on the recorder without any intervening obstructions.  So the remote is, for all intents and purposes, totally useless other than as a bullet point on the feature list to potentially suck in people like myself.  This was problem number one with the EVO: I honestly felt like I had been conned by the manufacturer.

I took another close look at the camera and recorder itself once I overcame my disappointment and irritation regarding the remote.  I decided that the gear still looked pretty solid, and still has an advantage (the separation between controls and camera) over the GoPro and similar options.  So the next question became: where can I mount the camera head and recorder on my bike?

The recorder turned out to be fairly easy to find a place for.  With the velcro straps on the included case, I was able to attach the recorder to one of the storage compartment doors on the Road Glide’s fairing.  Once the straps are tightened it sits fairly firmly and, with a bit of extra velcro, I was able to “lock” the case in place.  Not something I’d want to leave out while the bike is parked, but acceptable on the road.

The camera was more of a challenge.  Most of the places I really wanted to mount the camera head turned out to be unusable.  What I was hoping for was partial concealment of the camera head under the fairing, but all of these options ended up interfering with the bike’s steering, which is not acceptable.  The camera head is bulky, and the massive “military grade” (their words) cable and fasteners interfere with placement: that heavy and solid build is a drawback at times. 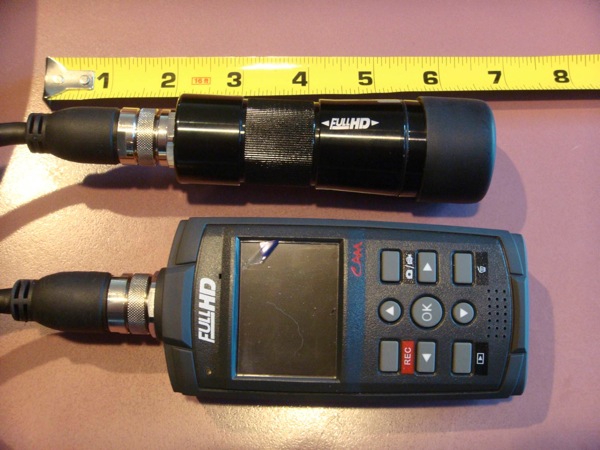 Once I eliminated my first choices, I went to my fallback position: the outer edge of the highway bars.  I started with the simple velcro and zip tie mount options that came with the EVO, but I wasn’t satisfied with the stability.  Basically, all they did for me was allow me to test various placements, but for the long haul I personally can’t abide by wobbly mounts on a motorcycle.  Fortunately, both the EVO camera and recorder have standard camera tripod mounts, so I went to the company that makes the most robust mounts in the business.   Of course I’m referring to National Products, maker of RAM mounts.

Getting the mount set up the way I wanted ended up adding another $75 or so to the price of my camera configuration.  And for future reference, there is a Canadian distributor of RAM products I can recommend, GPS Central, that will save you a few bucks on shipping and duty charges/hassle.   But the RAM products are something I feel confident recommending to anyone trying to attach gear securely to a vehicle: very well made, and a truly robust perch for gadgetry.

Once I got the camera located and powered on for the first time, I was fairly impressed by its function.  The little display on the recorder is primarily of use for insuring that the camera is pointing the right way up and so on- like most, it isn’t really useful for review beyond getting the most general sense of what was/is being recorded.  It also totally fades out in any kind of bright light, making it nearly impossible to tell if the thing is even on at times. A big bright LED with different colours (i.e.: red for on, green for recording) would be more useful in this regard, but alas no such luck.

I’ve already expressed my disappointment in the remote control.  But there is another problem with the unit: battery charging.

The included charger seems either mis-matched or woefully under-powered.  It takes 18 to 24 hours using this thing to charge one of the FUJI NP-120 Lithium-Ion battery packs from empty to full.  Each battery pack only gives about two hours of recording time.  The 32 GB SD storage will handle eight hours of recorded HD video.  This means that travelling with the camera will be challenging: after just half a day of recording filling only half of the available memory, you’ll need to stop somewhere for two days to be ready for another half day of recording.  This doesn’t add up very well, and means I’m looking now for a better charger for these battery packs.  Of course that’s more money (and hassle) on top of an already expensive solution.

I think the EVO-HD is a great camera, with some really bad choices made by the manufacturer on the accessory side of things.  It is almost like there were two completely different sets of objectives here: one from the video designers focusing on quality and performance, and another from the accessory team trying to cut corners and make things as cheaply as possible.  This is exemplified by the battery charger issue: surely someone tried this out before it left manufacturing, and noticed that the charger was horribly inadequate for the batteries.  But the failings extend to the design side with the pointless infrared line-of-sight remote control in particular: it makes no sense at all but is baked in to the hardware design.

I am really not sure quite how to take this camera kit as a whole.  I am into it now for nearly $600, so I’m stuck, and it *does* do a decent job of recording.  But I’m inclined to think that there must be some smarter alternatives out there with the same combination of features appropriate for motorcycle mounting without the strangely inconsistent functionality.

Here is one of my videos in both standard and HD resolution for comparison,  recorded on my motorbike with the Race Optics EVO-HD camera on a RAM mount:

The HD version of the above