Earlier this year I completed a motorcycle skills training course, bought a Kawasaki Vulcan, and got my motorcycle license.  I had ridden before back when I was still a teenager, but this time I actually got my license.  Between May and September I rode about 10,000 kilometres- most of that was smaller rides in the 100 km or so range, but I had several 500+ kilometres days as well.  During that time I learned a lot about riding, and more importantly about myself.

How I got here

I learned, for example, that I like a bike that can shrug off crosswinds to a degree.  I prefer carrying things with me when I ride, and enjoy longer trips so long as I can maintain a degree of comfort.  I found that my Vulcan became rather “exciting” at around 120 km/h, and not in a good way.  I found that my butt, hips, arms and hands could quickly, in a matter of minutes, become uncomfortable… and that re-engineering the bike could correct many of those discomforts.  And I confirmed that motorcycling is something I’m going to want to do over the longer term- the reality of riding a motorbike is as fun as the fantasy.  These things led me to start considering a different bike, a more “ideal” bike than my Vulcan, and I started assembling a savings plan to replace my bike in a few years.

I started discussing these plans with Irene as early as August.  Some things happened in my family that made me start thinking more about how short life is, and how easy it is to find it suddenly impossible to do the “one day” things.  Of course, this added a certain amount of frustration to my “one day” plans, a frustration that Irene started to hear from me on a regular basis.  After a few weeks of this, in late September, Irene said “Fine- if you want a different bike so much, you can have one now if we can adopt two kittens”.

Irene had, of course, been hinting about adding more cats to our household for years: that was how we made ElCee’s (LC… Last Cat) name somewhat inaccurate four or five years ago when we adopted Nimbus…. then Coco.  I take full responsibility for Iris, but she had extended our cat family against my better judgement as well.  And for a few weeks Irene had been cooing and goo-gooing over certain kittens at the shelter she was volunteering at.  Seeing the writing on the wall, I surprised Irene by immediately agreeing.  I talked about the kittens that joined our household as part of this deal, one of whom was named Harley in commemoration, in a previous post.

There is no such thing as the “perfect” bike.  There is a vast selection of really good motorcycles out there, from lots of companies that often compete in very narrow niches.  In other words, the consumer has a lot of good choices, and so the first thing to figure out is what type of riding you do.  Going extremely fast doesn’t interest me, so that removes the cafe racer/crotch rocket bikes from my list.  I don’t go off-road, so that’s another big block of bikes that I can dismiss.  I like a comfortable ride and want some luggage to cart things around easily: so that eliminates hundreds of other perfectly wonderful bike models that simply don’t match my interests.

What does that leave?  Amazingly, it still leaves dozens of models and brands to consider.  Bikes like the huge full-dress touring behemoths such as the Harley Electra Glide, Honda Goldwing, Kawasaki Nomad, and others.  Euro-tourers like the BMW 1300GT and the Honda ST1300.  And countless others that fit in as similar or equivalent, but with unique features appealing to particular individuals.  At this point, the choices become mostly based on emotional responses: which bike would make me feel the happiest?  Pure logic can be applied, but when I find myself starting to invent excuses that push a particular bike to the top of the list, I realize logic is not going to get the job done.

Where did my heart take me?  Well, when I was a kid and was imagining the “ultimate” motorcycle, it was always a Harley-Davidson touring bike.  Back then, that bike was the Electra Glide.  This is a full dress bike, or a “decker” (as in “all decked out”)- with trunk, saddlebags, fairing, lowers, stereo, cruise control, etcetera.  So I started looking at modern Harley touring bikes, and found much to like.  But it wasn’t the Electra Glide I kept coming back to, it was the Road Glide, the “black sheep” of the Harley-Davidson touring bike family.  After much soul-searching, I settled on the Road Glide Ultra, a choice that was cemented after a heavenly road test. 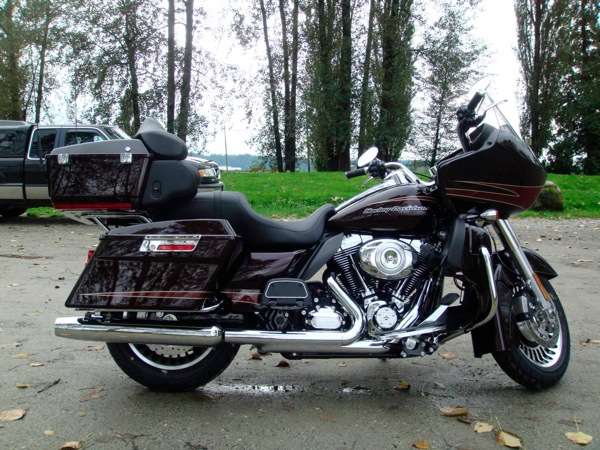 I picked the “ugly duckling” Harley-Davidson tourer, the Road Glide, although personally I think it looks great.  It is just as expensive as the Electra Glide, but unlike its better known sibling, the Road Glide has a frame attached (as opposed to fork attached) fairing.  In the picture above, you will note that the fairing (the big cowling on the front of the bike) is facing straight forward while the steering forks are turned- this is what “frame attached” means.  What it also means is that wind blasts push the whole bike around- not just the steering. 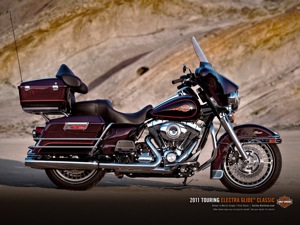 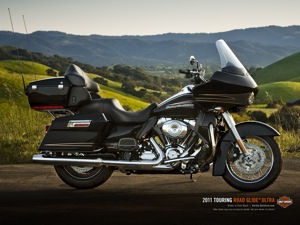 The Road Glide Ultra is a new-for-2011 trim package for the Road Glide.  I looked at getting a used Road Glide, but when I priced out the features the Ultra trim package includes (trunk, 103 ci engine, the new for 2009 highly stable frame design), it didn’t make sense to go used.  Harley-Davidsons have fairly high resale values, so a 2009 or even a 2006 with low mileage is only a few thousand less than brand new.  Adding the trunk alone would have added nearly $2,000 to that used bike: the engine upgrade is out of the park.  So, in the end I bought a brand new motorbike that is easily as expensive as many mid-range new cars.

It is worth mentioning a couple of things about cost.  Back in my youth, buying a Harley automatically meant spending close to 50% more than buying a comparable Japanese bike.  That was still true well into the ’90s, but during the last decade or so the price differential has disappeared.  A comparable Kawasaki Nomad or Honda GoldWing is within hundreds of dollars (less than 5%) of the price of my Road Glide.  Which leads to the question- are there any practical (i.e.: non-emotional) reasons for buying a Harley versus one of these near identically priced competitors?

In short, not a lot of reason.  But on the other hand, many of the reasons for buying a Japanese or European bike versus a Harley are no longer true either.  The old “Harleys leak” and “Harley engines are unreliable” arguments are based on two or three decade old observations: any Harley built since the mid 80’s have a newer technology engine (starting with the Evolution) that is as leak free and reliable as anything made in Japan.  During the past decade or so, Harley technology has also radically improved: their new touring frame is incredibly solid and stable, their fuel injection and engine computers are first rate, and the Brembo ABS brake systems they use are amongst the best in the world.

That leaves a few things that differentiate a Harley and which aren’t purely emotional.  One big one: many of the pieces on Harley’s are metal, and are plastic/ABS on their competitor’s bikes.  Notable pieces include the fenders, the engine head covers, and the crank case covers.  Hondas and Kawasaki bikes have plastic in a lot of places you just wouldn’t expect, like on the engine itself.  Another big plus for a Harley is the paint: over 4 mm thick with many layers of clear coat, Harley paintwork is without peer.

But the vast majority of the choice will be emotional.  If you like an utterly smooth, virtually silent motor, then  you’ll want to look at a Japanese or European bike.  But be careful: some of those bikes work hard to capture the sound of a grunting, vibrating Harley motor at idle.  Interestingly, once on the road the Harley sounds and vibrations basically disappear.  That road test I took on a Road Glide was the clincher for me- at highway speeds, the Harley was smoother and more “planted” than my Vulcan by a vast margin.  The tar snakes and road irregularities that made my Vulcan hop, jerk, and drag itself around were ignored entirely on the Road Glide.  It was an absolute revelation to me, and that one hour test ride changed my “one day, maybe” into a “I have to have this”.

At the end of the day, I’ve gone through two bikes in one year and blown the cost of a pretty nice car on what is, for me at least, a recreational vehicle.  It doesn’t replace my car, but it does do something for my soul that a car does not.  One thing about Harley-Davidson: their marketing machine definitely recognizes that riding a motorcycle is an emotional experience.  I’ve already been bombarded with welcome letters, club membership invitations, and beautifully printed “touring guides”.  I’m a Harley Owner’s Group (HOG) member, complete with a patch, a pin, and other geegaws: I have this odd sense of belonging that isn’t at all justified.

I’ve already put over 2,500 km on my Road Glide, even though it is getting increasingly difficult to find decent days to ride now that fall is fully upon us and single-digit high temperatures are becoming the norm.  I expect to take some longer trips on my bike next year, and am roughing out ideas for biking vacations down the west coast and to visit friends in Edmonton.  I imagine I will probably put more miles on my motorbike next year than on my car.  And that is probably a good thing. 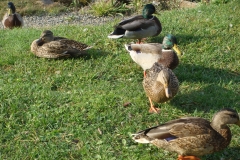