The last piece has arrived, and my Vulcan landing pad is, for this year at least, complete.  Behold, the Cycle Spinner: 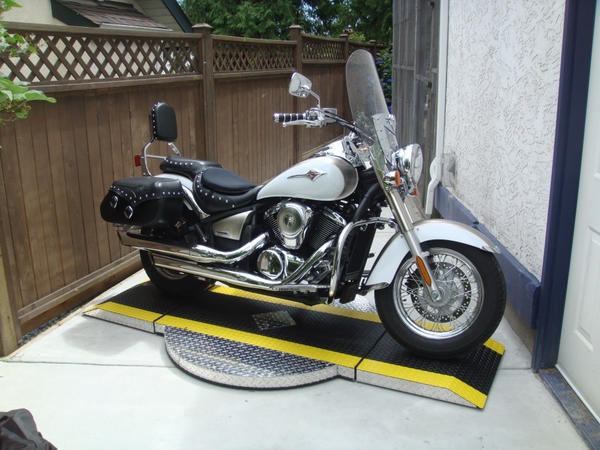 As with everything on this project, I’ve under-estimated how much room is actually required for things.  The Cycle Spinner fits where I’ve placed it, and my bike can be spun… but there is a nary a hair’s width of extra space fore and aft.  I will be scraping precious chrome and rubber if I don’t park the bike just so on the rotating contraption.  I could relocate the spinner to the wider part of the landing pad area, but then that leaves a difficult angle to ride the bike off and on.  No matter what I do, or how much care I take with measurements- reality is always a little different.  The net result is that, barring relocation of the spinner, I won’t be able to ever own a motorcycle longer than my current bike- not even one inch longer.  It really is that tight.

Regardless, the spinner itself is a brilliant piece of engineering and manufacturing.  Basically, it’s a lazy susan, but on a much expanded scale.  A dozen or so wheels underneath, each rated at over 250 pounds of support, permit the spinning motion.  The central frame is bolted to the concrete (a story in itself), and the platform is polished aluminum with a thick layer of oil-resistant rubber compound over the driving area.  The whole thing spins more or less as easily with the 650 pound bike on it as it does unloaded.  Unfortunately, because my concrete isn’t perfectly level, the spinning isn’t quite so easy that a six year old child can manage it… but it is pretty easy.

A side note to anyone in Canada considering the Cycle Spinner.  I had some difficulties finding a vendor in the U.S. willing to ship across the border.  The manufacturer doesn’t sell direct, and the first company they referred me to kept me dangling for weeks while they “checked out” shipping options.  When I realized they were never going to get back to me, I picked the next dealer in the list: The Garage Store.  Charlie there was a great help, and thanks to him the shipping got worked out via UPS Freight within a few days.  However, be prepared for a bit of sticker shock: the freight itself was over $400, and brokerage fees to get it into Canada were another $250+.  I was expecting about $600 for shipping (the Spinner is shipped on a pallet and weighs around 200 pounds), but some people might not be prepared.  If you have a truck and can drive to the U.S., you might find it cheaper to pick it up at a dealer there.  Regardless, costs quickly start to approach $2,000: this isn’t a cheap option.

So what’s next?  Well, as soon as I received the spinner and got it installed, I went out and bought a bike cover and lock.  That takes care of the essentials.  I also cut back more of the plants at my excessively narrow entrance to the landing pad.  When I complained about this, Irene said something like “I thought that looked too narrow”, at which point I rather forcefully reminded her that the reason it is narrow is because she whined and complained about any impact on her precious greenery, at which point she reminded me that I could have paid to have all her plants transplanted to another location, at which juncture I clarified that we had established that there was no room elsewhere in the yard.  It was a fun discussion 😉  As it is, I suspect I will be clearing out some plants and putting a few concrete bricks in to provide an extra few inches at the entrance.

I have three more  accessories for my bike on the way: handle bar pullback risers, an airhorn, and a new saddle.  I think that covers everything I want for this year- Irene says “it better” 😉 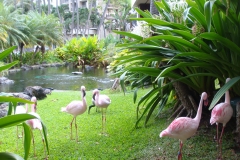