I’m having a parking space built for my motorbike.  There isn’t any extra room in the garage for it, and my car is tired of being parked out on the road.  But like a lot of things in my life, this simple change is far more complicated than I was originally hoping. 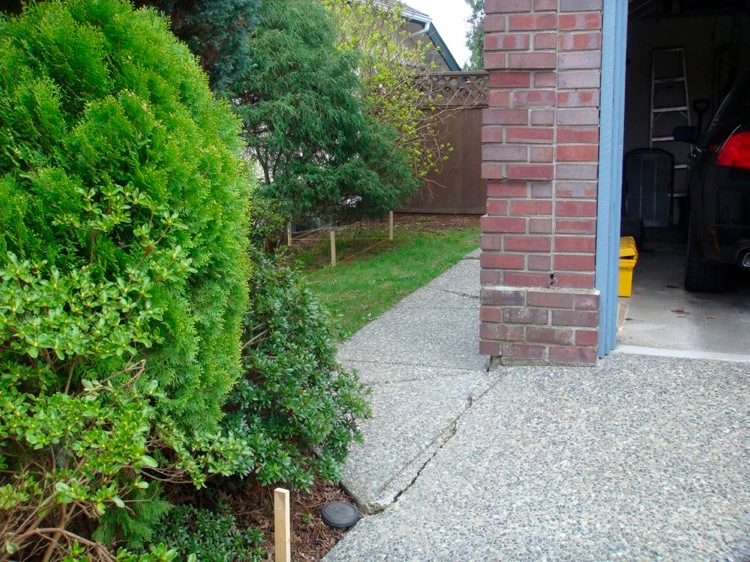 First, I picked the spot, and frankly there was absolutely no choice here- it had to be along the east side of our house.  This is a small space, at most about 12 feet wide, but narrowing down quickly- I knew from the start that this was going to be cramped, and likely would require installation of a device to turn the bike around.   It also required removing one fence panel and the gate, but that was a small problem: the gate on that side of the house has never been very effective.  I have a longer term plan to have that replaced with an aluminum fence and gate once the concrete and other necessities are in place.

My next challenge was finding a contractor to do the work.  My first attempt consumed about three weeks of exchanging information back and forth before I concluded the company just wasn’t going to be one I wanted to deal with.  They weren’t returning my messages or calls, and after another couple of weeks still hadn’t provided a quote.

Fortunately, the site pictures and “design” I created were useful when I found the actual firm to do the work: L&L Hanson Construction Limited.  Jeremy there responded quickly and I had a quote within a couple days of talking to him and providing the details.  The price was going to be steep: higher still once I decided to have the original sidewalk in that area, which was cracked in several places, ripped out entirely.  But the work was under way… sort of.

I knew I had a sprinkler head in that area that needed to be moved, so I called our sprinkler company, University Sprinklers, out to have that done and to have the area inspected to confirm whether there were any pipes running under the area to be covered in concrete.  Guess what?  That’s where our main sprinkler line to the back yard runs.  So that had to be dug out, sleeved (i.e.: a larger “conduit” pipe put around it), and replaced.  That added another couple of weeks and hundreds of dollars to the price.  The guy from University was great, and did a wonderful job putting things back around the deck after having to move everything to find the sprinkler valve- I’m glad he was able to complete the work.

Today the concrete is being poured, which is a primary milestone. 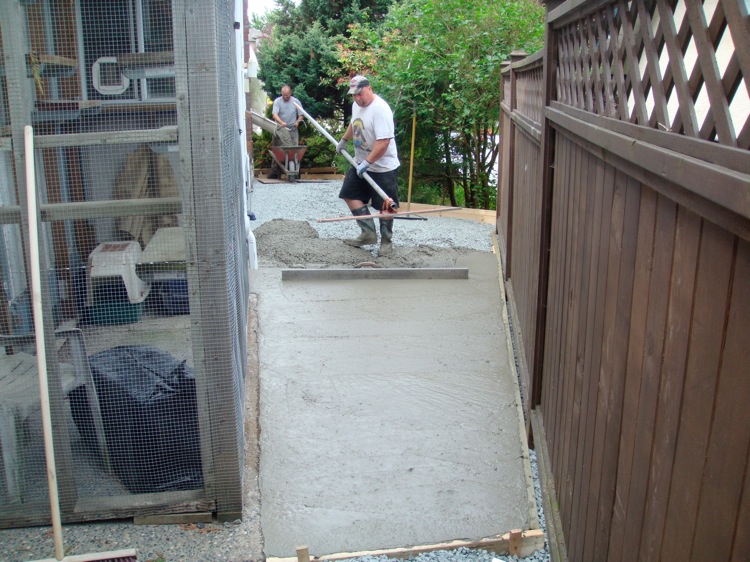 Soon, the space will be complete.  However, I can’t really park my bike here yet: the space is too small to practically turn the bike around by hand.  A seven foot long bike takes a lot of back-and-forth to turn around in an 8×16 parking space, and this space is about 8’x10′, with a 4’x10′ extension.  I knew this was going to be tight but, with more experience on my bike, I now know it is on the edge of impossible.  The solution?  A motorcycle turntable.

Of course, the manufacturer of the turntable I want is in the United States, with no dealers in Canada.  So I’m working with a U.S. dealer to see what it would take to get it shipped up here.  In the mean time, I have a slab of concrete that has now cost several thousand dollars to get installed.  On the plus side, my bike just had its 1,000 km (1,265 km on the odometer) “break in” service: oil changed, bolts torqued, and ready for another 5k of riding.  That should take me through the summer, I think…

2 thoughts on “My Vulcan landing pad under construction…”