I’ve been sick with a sinus infection for the last several weeks, and am now mid-way through my second week of antibiotics.  The infection was the outcome of my earlier flu that made my motorcycle lessons a bit more challenging.

The illness has somewhat impacted my “biker geek” adventures, but hasn’t halted them entirely.  I’ve managed to put a bit over 600 kilometres on my Vulcan, 200 of which was accrued on my ride yesterday with my Nephew Shane and his cousin. 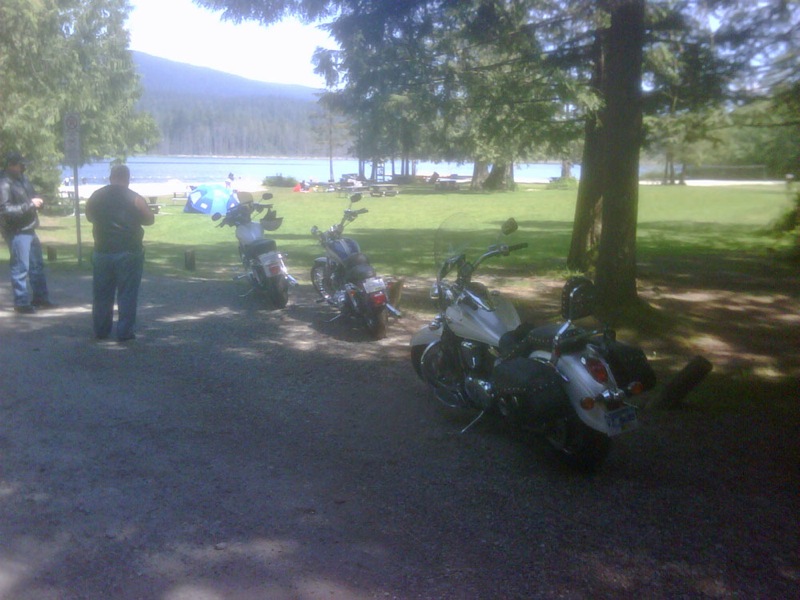 We met in Abbotsford and then went up to Lake Whonnock.  Apparently I went there at least once before with Judy and Shane when I was a teenager: I can’t remember that earlier instance, but this ride was definitely memorable.  I was “in the saddle” riding my bike for about five or so hours in a single day, which is about three times my previous daily maximum.  When I got home I was tired, but it was a good kind of tired: my sinuses and cough were, if anything, less problematic.  I’m not sure if I’d call the ride physically therapeutic, but it definitely was worthwhile mentally.

This was also my first extended ride with my new Draggin Jean motorcycle pants.  These made-in-Australia pants (I bought the cargo style) are partially Kevlar/Dyneema lined, and are quite a bit more comfortable than my armoured pants.  The thing to note is that, unlike my armoured pants, there is no real impact protection (by default) in Draggin jeans: their main safety feature is to protect against abrasion.  The main advantages over full armoured bike pants are comfort and convenience.  Comfort comes from the flexibility and comparative coolness of the fabric.  The convenience factor is that you can wear them in to a restaurant or at work, avoiding the hassle of changing clothes when you stop. 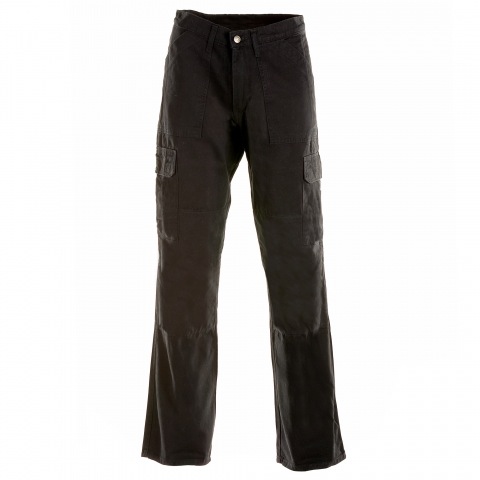 I should point out that Draggin jeans are much more expensive than the pants you pick up at Walmart: it is debatable whether the extra protection is worth four or five times the price.  But I kind of like the idea that I have the same material used in a bullet proof vest protecting my butt….  Note: Draggin jeans will *not* render your backside bullet-proof, just skid-resistant.

The other “new” thing I’ve been using a lot in relation to my bike is a Garmin Zumo GPS.  This is a motorcycle-specific GPS: some might ask “why motorcycle specific?  Why not use a cheaper “normal” GPS like a Garmin Nuvi, which is half the price of a Zumo. 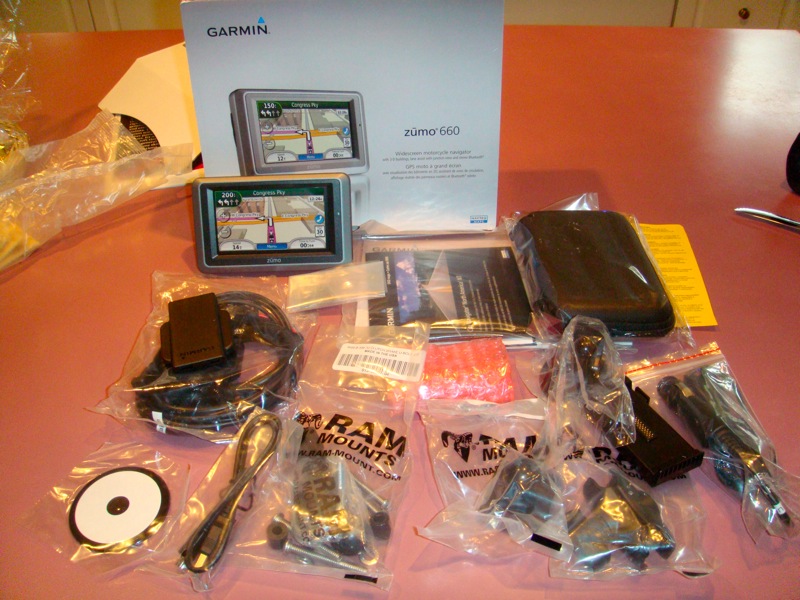 Truthfully, there is nothing stopping you from using a normal Nuvi or any of the even cheaper GPS devices: you just need to mount them securely to the bike.  The problem is that “normal” GPSes are neither shock/vibration nor water resistant.  From what I’ve read on various forums, normal GPSes mounted on motorcycles are pretty hit and miss: many people report them simply dying after a month or two of use, others seem to be able to keep them running much longer.   Note that if your car GPS fails when it is mounted on a motorcycle, you will probably have voided your warranty.   Personally, I don’t like the idea of replacing my GPS every year or so, nor do I like the concept of it my warranty being invalidated as soon as I attach it to my bike.  It is also worth noting that the Garmin Zumo 660, which is the one I bought, includes a complete RAM mounting kit which, if you bought the parts separately, would cost somewhere around $50.

The Zumo 660 mounted easily to my Kawasaki Vulcan 900 with the included mounting kit.  The only “challenge” was hooking the power cable to the Vulcan’s accessory connector.  The accessory connector on the Vulcan is sort of a giant-sized version of a female blade connector, which kind of looks like this: 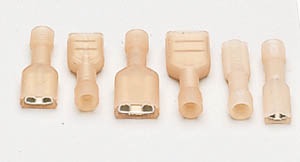 Unfortunately, neither the Source (aka Radio Shack aka The Shack) nor my Kawasaki dealer had the right part.  I read on the Vulcan forums I occasionally visit that something called a “bullet connector” would fit into the “rounded” portion of the female blade.  I was doubtful, but back to the Source I went and picked up a package of connectors that look like this: 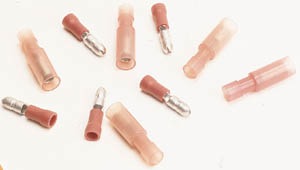 The male connectors from that set fit perfectly into the connector on my bike, and also support the right gauge of wire (22-16) from my GPS kit.  Even better: there is a spare “hole” in the blade for a connector to fit later.  The downside: the accessory connector on the Vulcan (which is under the seat- apparently there is a second one somewhere under the gas tank) is unswitched (i.e.: anything connected to it will draw power all the time, whether the bike is running or not).  Fortunately, I will always be removing and carrying my GPS with me: the Zumo mounting kit has a quick-disconnect switch and a carrying case for the Zumo itself, so that is something of a no-brainer.

One “fun” thing I never really anticipated when I bought the GPS: it keeps a complete “track” of each ride (from Zumo power on to power off) you go on.  You can download that track from the Zumo into software on your computer.  On the Macintosh I’m using Garmin’s BaseCamp, which is available for free to registered Garmin users.  Basecamp can then send the track data to Google Earth, which can then replay your trip with full satellite imagery.   When I say “replay”, I mean it animates your path with a sort of “low altitude” (700 m) viewpoint.  The first time I did this, it felt like I was flying an ultralight along the same route I had ridden earlier that day on my motorbike.   Very cool, indeed. 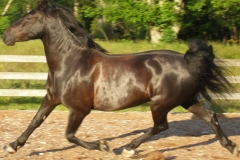