A few weeks ago I decided to start setting up a little place in the house where I can work on fiddling with clock mechanisms. I have discovered that there is some sort of strange and mysterious aura surrounding what I had originally thought was a humble and simple to acquire item: a suitable workbench.

I’ve bought a couple of tools, most notably a special stand for working with the mechanism when it is removed from its case: believe me, this would have been worth its weight in gold a few weeks ago. And so I have decided it is important to get an appropriate workspace to house my gear. A workbench will help me define my clock twiddling environment. Sure, I could work on the kitchen counter, but as Irene will tell you this sometimes leads to… conflicts.

I considered repurposing an old desk, but I gave some thought to that. Most clock and jewelry repair workbenches are higher than a normal desk: the work surface is 8 to 10 inches above something you would want to write on, closer to 40 inches off the ground versus 30 or thereabouts. Clock and jewelry repair benches also generally come with appropriate storage drawers and the like, which seems like a good idea. If I had a shop, circular saw, and other appropriate tools, I could probably build something for $200 or so… but I have none of those things, and getting them would initiate an entirely separate set of projects. So off I went to find something reasonable on eBay.

I found several very similar alternatives right away, and the prices seemed in the right ballpark: around or below $300 U.S., which is fair for something made out of solid wood. But I noticed something odd: they had strange notices regarding shipping: 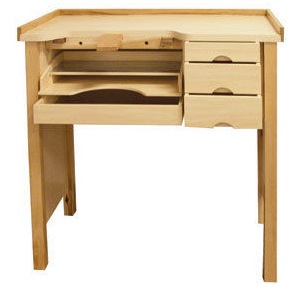 It seemed odd that an item selling for less than $300 should have $600 or $700 worth of shipping tacked on. I even contacted the sellers, and got such illuminating responses as “Yes, that’s the shipping cost”. I’ve only listed two examples, but there were at least two more, all with the same strange shipping versus item cost disparity.

I began to wonder at what might be causing this high shipping cost. Are the desks made of some strange wood that weighs several pounds per cubic inch resulting in an item weighing seven or eight hundred pounds? Could it be that the bench must be wrapped in live chinchillas and packed in a special foamed steel chassis? Does some guy with a black suit, extra dark raybans, and an earpiece wire dangling from his ear have to handcuff himself to the item and carry it on board the plane personally, especially when shipped to New York, Maryland, or Canada?

These and other questions must remain unanswered as I finally found the same desk from another vendor that only wants to charge $125 for shipping to Canada. Sure, it isn’t cheap, but it is more in line with what I expected to spend. Of course, now I’m having problems getting the actual order to complete (a problem with eBay’s ordering interface), but the vendor is being helpful- with any luck, I’ll have a bench in a month or so…

2 thoughts on “I want a workbench…”