Recently I’ve started to feel the limitations of my long-term cellphone, a Motorola Razr. I’ve had it now for five years, which means it is “ancient” by cell phone standards. Yet it has served me very well for most purposes. However, a couple of years ago I started configuring various server monitors at work to send me email messages when they ran into trouble. These messages are generally too long for the SMS service provided with my Razr, and my latest round of updates has resulted in these messages becoming largely unreadable: the emails are too long and complex.

And so I begin to consider an upgrade…

It is important to note that my employer is not paying for my current cell phone, nor will they be paying for the new one if I upgrade. I *could* try to get them to pay, but frankly it is far more trouble than its worth- the justifications, monthly expense filings, and general frustrations involved (all intentional on the part of my employer, I’m sure) make it easier for me just to justify it to myself and leave them out of it. I hate coming in on Monday and finding a huge catastrophe in progress because a server went down, and would much rather find out about it on the weekend so I can do something about it.

If my employer *were* paying for the phone and phone service, the choice wouldn’t be a choice at all: I’d have to get a Blackberry. They won’t pay for any phone not provided through Bell (Rogers/Fido is the only supplier of iPhones in Canada), and the only “supported” smartphone regardless of carrier is the Blackberry. But since I’m paying for this myself, the iPhone is an option.

Now we come to my requirements:

From what I’ve been able to determine via Google searches, both phones will meet my basic requirements. The iPhone apparently has a “richer” email client in terms of HTML and visual support: the Blackberry’s email apparently only permits some attachment types if you have a Business email service (I.E.: are attached to corporate email). But the Blackberry *could* be attached to my employer’s corporate email- there are hassles associated with that, but it is a possibility.

I don’t have any need at the moment to compose large or complex emails on the device, but if I did I’d probably want a physical keyboard. I don’t need a browser, or games, or fancy apps. I do however have a couple of Macintosh computers, and so there are likely a lot of things I *could* use some of those “fancy apps” for if I did have an iPhone. For example, there are ways to remotely control your Macintosh via an iPhone: I could see doing that to (for example) set up a movie or song download, or select a particular song to play if I ever get an iTunes remote audio solution.

I’m torn. I’m pretty sure I would have more “fun” experimenting and learning with an iPhone. I am also pretty sure that the iPhone would likely end up costing more per month to operate, although both are expensive- on the order of $70-$100 a month versus the $45 a month I currently spend. To an extent, I think I’m probably leaning towards the iPhone and looking for justification, but at the moment I am still far from settled. Note that I am quite well aware of the fact that I’ve made derogatory remarks about the iPhone in the past- those still all apply, but the intriguing factor of the device still remains.

Update: I’ve been digging around and found that one thing that is lacking with the iPhone is configurable/repeating email alerts. Apparently, short of jailbreaking the phone and hacking the firmware, there is no way (currently) to add this feature. Since most of the messages I receive are coming from servers in some sort of “emergency” state, I need pretty clear alerts. The Blackberry apparently has configurable alerts and can be set to have different behaviors depending on who the message is from:. By itself, the lack of this kind of feature in the iPhone is almost a deal-breaker for me.

11 thoughts on “The big question: iPhone or Blackberry” 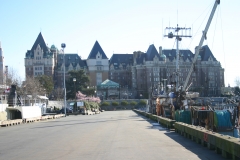