There is no release date yet, by the way, for the first (Terran) “chapter” of StarCraft II- probably late 2009/early 2010 if you believe the rumours. That means you’ll own the full StarCraft II experience by about 2015, give or take a year. Scary thought: I’ll be fifty one years old in 2015.

Diablo III, another much-anticipated Blizzard release, is at least three years in the future, in case you are wondering. The growing rumours indicate that it will likely also be released on consoles like the XBox. And Blizzard has a “next generation” massively multiplayer game in development, and no, it isn’t a replacement or “upgrade” of World of Warcraft. My bet is on “World of StarCraft”. That would be in keeping with Blizzard’s tendency to milk their intellectual capital for all it’s worth. Apparently this “future MMOG” will also be released on consoles, but probably not “current” consoles- likely for Playstation 4s and XBox 720s (or whatever they name the next generation of consoles): expect to see it around 2013 or 2014.

To be honest, I don’t care much about Diablo III’s release. Diablo was fun, Diablo 2 looked like the exact same game as Diablo but with smaller pixels, and Diablo 3 looks like Diablo 2 but with new World of Warcraft style artwork. Similarly, I liked the original WarCraft, and felt no real interest in playing Warcraft 3: it looked like more of the same. And if they are going to release a new MMOG in seven years or so, hurray for them- I guess I don’t worship at the altar of Blizzard.

I’m waiting impatiently for Fallout 3 and Fable 2, though- so it isn’t that I have a problem with sequels. If I really, really enjoy a game, the sequel is something I *must* have. So, even though I’m not a Blizzard fanboy, I do understand the sentiment. 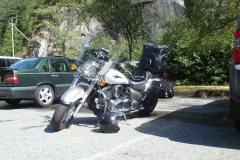