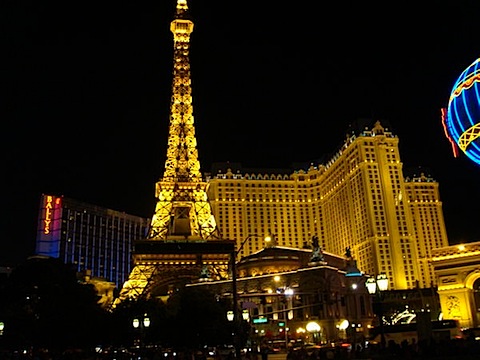 I took this picture Saturday evening: that is the Paris Hotel and Casino, with its half-scale version of the Eiffel tower.

During our three full days in Vegas, we did the following:

By the end of Day 3, my feet were killing me- every hotel in Vegas is at least a mile long, or so it seems, and to get from one monorail entrance to a particular hotel/casino usually involves walking through two or three of these massive structures. The monorail was great, by the way: $9 a person for a 24 hour ticket- ride as much as you want. My favorite parts of the trip were the times when we were able to get away from the casinos themselves. Which leads to my opinions about Las Vegas.

What did I think about Vegas? Well, it is definitely worth seeing- Irene and I had a great time, getting a real mental break from the normal day to day. There is a tremendous amount of entertainment compressed in a small area, and there is always something going on. Would I go again? Probably, but I don’t think I’d make Vegas itself my primary “hub” for touring. It is too loud, too bright, and too tiring. I don’t drink or gamble to excess, so a big chunk of the appeal of Vegas is lost on me.

It is probably worth noting that the drinks may still be cheap in Vegas, but everything else is pretty expensive these days. Expect buffet prices to start at $15 per person for breakfast, and about $20 a person for supper. Don’t get me wrong, that isn’t a bad price at all: but if you expect to eat for $10 a day in Vegas in the 21st century, you are out of touch. If you want to attend a show, the prices start at about $45 per person and climb based on the fame of the show’s star and the seating location. Bette Midler or Cher command $150+ a person, with really good seats going for $900 a person: note that most of the tickets for the “name star” shows are sold out months in advance. Cirque de Soleil shows (of which there are several: Zumanity, Ka, O… ) are $75-$125 per seat. Some magician I’ve never heard of before costs about $45 a seat. Budget accordingly.

The casinos in Vegas are still all “smoking permitted”, and I found that to be a lot tougher for me to deal with than I expected. All of the public spaces *other than* casinos are non-smoking. However, all the buildings are structured to herd you right through the gaming floor, often several times as you make your way from one attraction to the next. I noticed that I was rushing, almost running through the casino floors in order to get to clear air again. And invariably some guy wearing far too much gold for someone with so much grey hair and belly flab would come around the corner with a $50 cigar blowing smoke in my face just when I thought the air was breathable again. It was worse for Irene, but she put up with it far more stoically than I expected.

When we go back to Vegas, and I’m sure we will one day, I think we’ll focus more on going to a few shows or exhibits over several days instead of trying to see several per day. Without long rests sitting in front of a slot machine or gaming table, the walking is just too much- like I said, my feet were literally killing me. I also think we’ll probably pick a more centrally located hotel like Caesar’s Palace or Bellagio.

Did we gamble at all while in Vegas? I put $1 into a slot machine at Ballys and came away with $2: I briefly had $5. We also plugged a twenty into one of our favorite machines (Hexbreaker), and came away with $35. That was pretty much it for our gambling. And despite the miles and miles of walking, and the fact that I missed quite a few meals, I actually somehow gained weight while on vacation.

Apropos of nothing, here is a video I shot of the dolphins while we were at Siegfried and Roy’s Secret Garden…

6 thoughts on “Back from Vegas”