Our washer died about a week ago. It was a Maytag Neptune frontload purchased in late 2000, so its failure was more or less inevitable. The point of failure was in the control panel: the washer locking mechanism blew out, which caused a cascade failure in the control board. Repair would have been $600-$800.

I shouldn’t really complain- we got over 7 and a half years of service out of a washer renowned for its high failure rate and defects (the problems in the product family showed up after we bought it). But to me seven years isn’t exactly a stellar record for a “top of the line” washer. Live and learn: great/well respected brands can die ignoble deaths at times.

In any case, we only pondered the repair versus replace question for about 5 seconds. Irene and I were in almost immediate agreement- we wanted to replace the washer and, since we weren’t terribly fond of the Maytag dryer, we wanted to get the pair. I did a little research, and then we went to Trail Appliances to make our final decision. We settled on the LG SteamWasher and its dryer companion. Irene convinced me to get a colour- the pair are navy blue.

I was a bit torn between the LG and the Miele washer/dryer. The Miele are probably better quality, but they looked… clunky. Not exactly high-tech, and I hate to admit it, but the tech sells me more often than it should. LG has a good reliability and service reputation, and was about $800 cheaper for the pair (Miele is about $3500). For that price, the Miele lacked steam cleaning and was a slightly smaller capacity. Mind you, Miele is pretty much the only washer/dryer manufacturer that builds and tests their gear with an expectation of 25 years of use- most of the other manufacturers target 10 years. We looked at the Bosch as well: we have been really happy with our Bosch dishwasher, but the clothes washer control panels take up some of the “folding space” we like to use on the top of the machine.

They were just delivered an hour ago or so, and I’ve already almost finished running through the first load of laundry in the washer. It is quieter than the Neptune (except for the 1300 RPM spin cycle, which is rather noisy- this would probably not be apparent if the washer were situated on a concrete floor in the basement), and I like the little drawer that slides out for loading detergent and bleach. The “I’m done” alert is a nice little tone instead of the horrendous buzzing sound that most older washers seem to favour. The controls are completely electronic- no manual “clockwork” knobs which, in my experience, are the first part of a washer to die. And the LCD display tells me handy things like how long it estimates it will take until completion… based on load size/weight and cycle choices.

So far, though, the biggest “feature” is the glass door- watching the clothing spin around is fascinating. I remember this from laundromats when I was a kid, and forgot how mesmerizing it can be.

4 thoughts on “New washer and dryer” 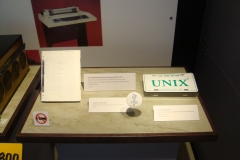