I don’t know much about the U.S. elections. I’ve sort of been absorbing the democratic nominations… I think I would be more or less happy with either Hillary or Barack becoming President. The republicans? Hmmm: the only ones I’ve heard about seem to be Right wing evangelist fruitcakes who think the earth was formed in 7,000 years and that homosexuals will damn all of us to hell.

In any case, it isn’t often that I see something relating to a political process that makes me feel good. This video made me feel good– it is based on a speech given by Barack Obama that was turned into a video by a number of musicians. I like the message- enough with the policies of fear and hatred, lets start thinking in terms of hope and what we *can* do, not what we can’t.

Yes, I realize it is all just words, and politicians are masters of the Big Lie. But hope is something sorely lacking in American politics, and seeing a politician talking about hope is inspiring.

3 thoughts on “Barack Obama: Yes We Can” 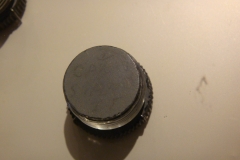