Apple learned a great deal from the battery complaints that users had about the early iPods.  First, instead of just making it challenging to get at the battery in the iPhone, they have actually soldered it in.  Second, they have announced the battery replacement cost and policy almost concurrent with the release of the phone itself (Apple: iPhone Battery Replacement Plan Details – Gizmodo ).

The battery in the iPhone will last through 300-400 recharges.  Apple estimates this will translate into one to two years of average use.  The battery is soldered inside an extremely user-inaccessible case: opening it will not just damage the finish and end your warranty, but will almost certainly destroy the phone itself.

Here is how this will work.  You’ll pay about $699 U.S. to own the iPhone.  You can only choose one phone service provider: AT&T’s service, no doubt paying a premium (I’d be surprised if it was much less than about $75 a month).  By the way, AT&T will be your only choice for at least five years, which is the duration of their exclusive contract with Apple.  Once a year or so you will pay an additional $90 and experience the great privilege of being without your iPhone for about a week, probably two or three weeks if you live somewhere outside of California.  When you get your iPhone back, it will have a nice new one year duration non-replaceable battery and will have forgotten all of its settings and need to be re-initialized.

They sold over half a million of these things in the first weekend.  I really hope that the device is truly revolutionizing the lives of every person who bought it… 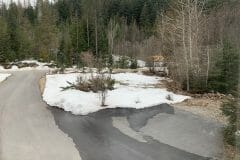