I decided to play a little bit of Lego Star Wars II tonight.   It’s a cute game, essentially a “platformer” with very prettily rendered 2.5d graphics.  That one sentence summary is doing the game a disservice- it’s quite large and reasonably faithfully reproduces the stories from the original three Star Wars movies, albeit with a humourous/comical twist.

It is important to note that the primary target audience for this game is little kids, 10 years old or thereabouts.  I’d read about it and thought it would be a fun diversion now and then, so I bought it.  But here is the part where the wheels come off the truck: I’ve had to resort to a cheat / walkthrough (warning- spoilers at that link) in order to finish several of the levels.

I consider myself a moderately competent gamer- I’ve never claimed to be “elite”, but I do okay.  It is humbling to be reduced to “cheating” in order to figure out how to finish a level of…a kid’s game.  And not just one level- I’ve gone back to the above-linked walkthrough now three times.  Each time, I cleared out what I could see of the level and then spent another thirty to sixty minutes trying to figure out how to get further before “giving up”.

It is perhaps somewhat telling that I generally don’t have to resort to walkthroughs in order to finish a “big kids” game.  Halflife 2?  No problem.  Doom 3?  Easy stuff.  Gears of War?  I needed help with the very final battle with RAAM, but nothing else.  I am not too proud to resort to a Google search if I get stuck for more than an hour or so, but usually I can muddle my way through.

Yet a game designed for 10 year olds has stumped me repeatedly during the first few hours I’ve played it.   Worse yet, when I read the walkthrough I usually go “d’oh, why didn’t I see that?”.  You often have to use the abilities of the different characters in your party at a given point in time in a certain sequence (E.G.: R2D2 can hover a bit, Yoda is strong in the force, some characters are required to open certain doors, etc.).  The puzzles aren’t mind bending by any stretch, but for whatever reason I’m missing obvious things like spots where the afore-mentioned ability of R2D2 to hover can be used to get to a tricky spot.

Of course, a lot of the time I’m getting hung up on things like not thinking to shoot flowers and wildlife on Dagobah in order to complete Yoda’s quests.  Who’d have thought destroying plantlife would make me One with the Force? 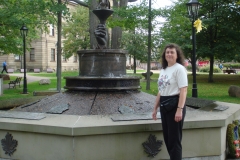