And apparently a company also known as Vista is contemplating legal action to prevent use of the name. So not only is Microsoft unable to pick a name that actually tells you something about the OS, they can’t even pick a name that someone else hasn’t already used.

I am kind of torn here. New operating system releases have the potential to be kind of fun, and its been a while since Microsoft has had one. But Vista? First it was version numbers, then the year of release, and then, when the year of release became “the year we originally wanted to release it, kind of, but that we missed”, techy-sounding acryronms. But Vista? What the heck is that, other than a really kind of juvenile play on words?

Sticking with the word-play thing, they could have called it “Windows Storm”, or “Windows Aluminium”, or maybe “Windows Cleaner”. If you want to break away from the play on words, maybe try truth in advertising: Windows CashGrab, Windows KindaLate, Windows OSXFeatures, or Windows BetterSecurityPatchThis.

Okay, I promise: that’s where I stop with the dumb Windows names. Until the next time Microsoft decides to come up with a new naming convention. And the bad thing here is that I actually *like* Microsoft products… 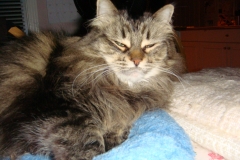