I wasn’t quite sure who she belonged to, but on one of our trips past Irene and I noticed that the area was relatively clear of people, and the dog was watching us with a happy expression on her face, so we approached. An imposing but cheerful looking fellow was sitting behind a table next to the dog with a small stack of books. Recognizing that service dogs are on duty, I asked if it would be okay for me to say hello to the dog. The large fellow assured me that it would be, and that he and his family kept her more open than most service dogs to being approached.

As I said hello to the dog, I asked the fellow what he did. The lady behind him seemed aghast, but the fellow seemed non-plussed: he introduced himself as Gordon Kirkland, columnist, author, and comedian. I still had no idea who I was talking to, but we chatted about his service dog (Gordon is partially paralized) and marriage (I mentioned it was Irene and my 15th anniversary).

Apparently Gordon was used to not being recognized in Canada- he’s more famous in the U.S., where he has a syndicated column- Gordon Kirkland at Large. I have a further excuse: I have more or less stopped reading newspapers and watching news on television during the last five or six years. 90% of my “news” type reading is delivered via the Internet, where I get to decide what the headlines are.

I decided to rectify the unfortunate blank space in my knowledge and, since I liked his brand of spoken humour, I figured I couldn’t go too far wrong. Besides, he’s a Canadian, from my region even, and I like to support locals. I bought a copy of his book, When My Mind Wanders It Brings Back Souvenirs. Gordon was very kind and wrote a small dedication on the inside for us.

I love the book. If you’ve never read anything by Gordon Kirkland, then perhaps an inept comparison or two would help. To my way of thinking, his writing is akin to Erma Bombeck’s, except from a male point of view. There is a bit of the wry humour of Scott Adams in there as well. The book is, I believe, a collection of selected columns from his newspaper work.

By reading the book, I’ve learned a bit more about his service dog. In the book he mentions Tara- I’m sure he called his dog that we met by that name as well, but I’m terrible with names. Certainly she fits the description. Anyway, thanks to Tara for introducing me to a new author and commentator on life. 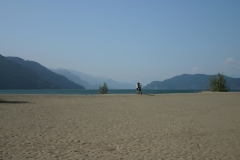