Our trip to Cazic Thule… 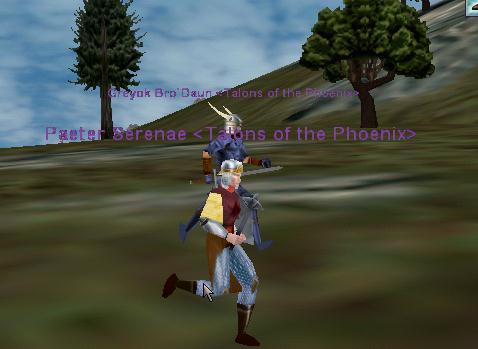 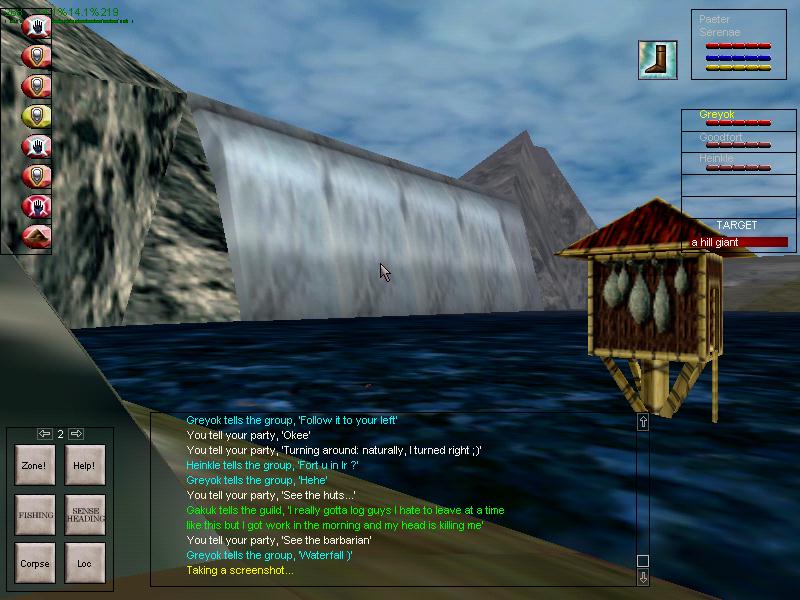 This waterfall did not attack us. It did not give us any experience, or drop any phat l33Wt. Instead, it just sat there and looked pretty. I like that. 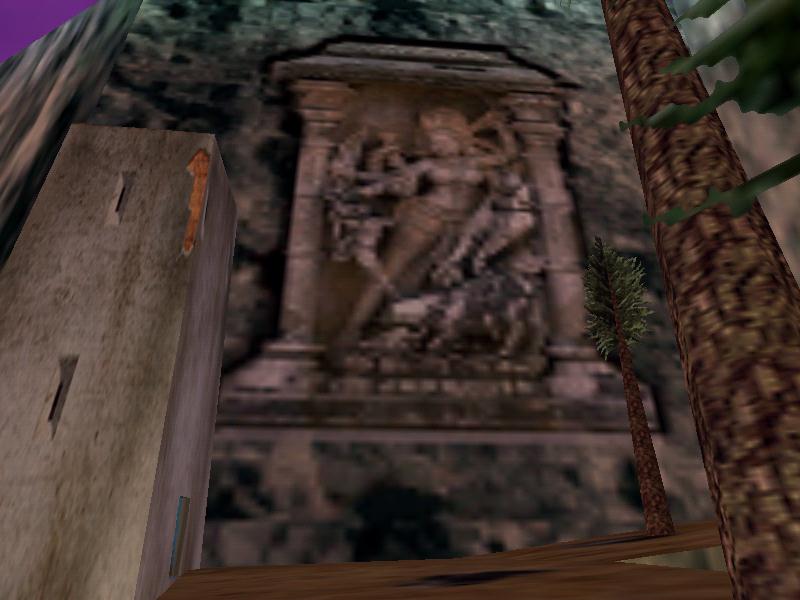 02/23/00: “Remnants of an ancient civilization? Or an early attempt at tagging?”

I have no idea where we were when I took this picture. It was somewhere with lots of precipitous drop offs, somewhere between Splitpaw and Guk I believe. Whatever, this caught my eye. I’m like a magpie that way: I like shiny, pretty things. Oddly, this also did nothing to move my experience point bar or fill my bank account… 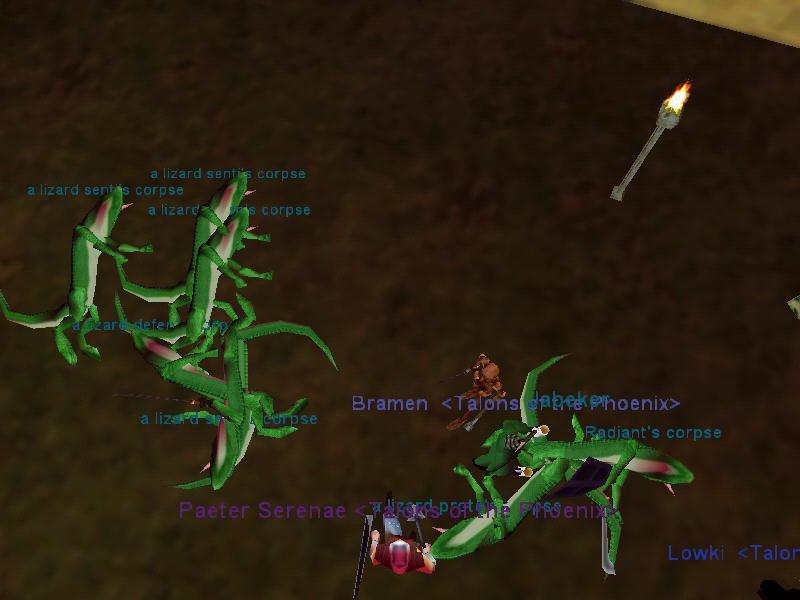 Greyok and I stopped at Guk briefly, and found it to be unsatisfactory. So, we continued on to Cazic Thule the next day. Here, the natives of Cazic greet us with their traditional “pile of death”.

Seriously, though, this was the result of about five or ten minutes of hard bashing. I was off somewhere else when the fight started, and came running up to heal folks at about the mid-way point in the battle. I suspect the Lizardmen felt it was unfair to have their foes suddenly become healthy again. 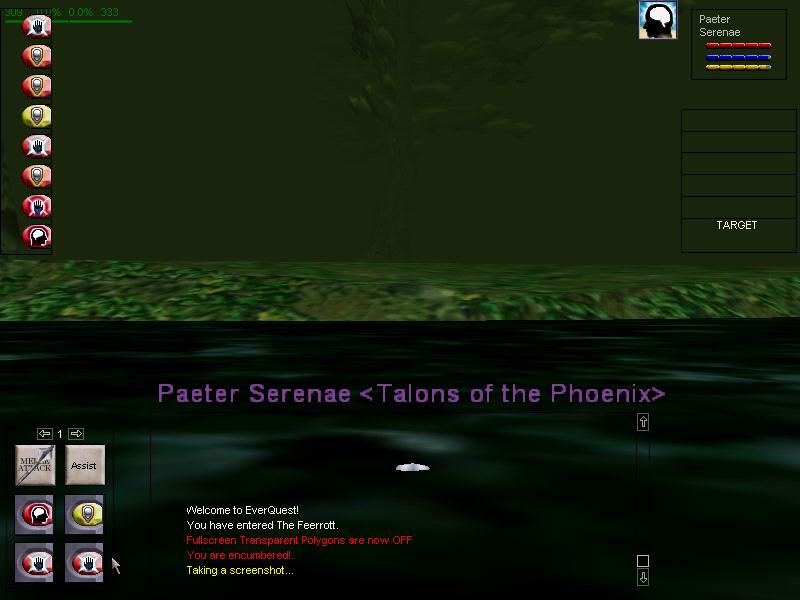 This is a pretty common situation in the area around Cazic Thule. Nearby is the large swamp area known as Innuthule. Feerrott, a dank, and swampy forest, is adjacent to Innothule, and Cazic Thule is an abandoned temple complex within Feerrott. There is a lot of water in between these areas. Paeter’s swimming skill has gone from about 17 to about 40 in the few days we have been in the area. 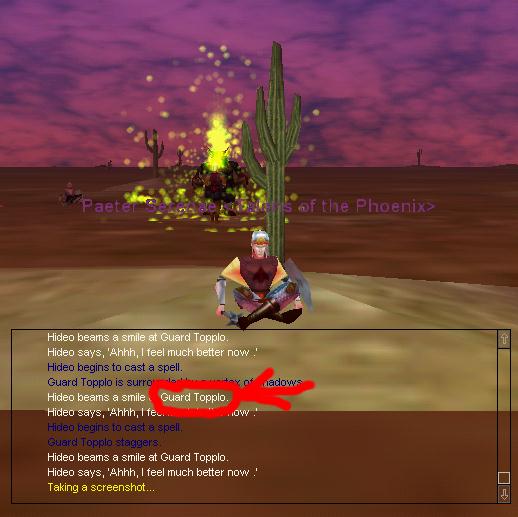 Freeport is the city nearest to Cazic Thule and also safe for “good guys” like Paeter to go to. Here, Paeter is relaxing in front of the city gates (facing towards them: this picture is looking away from the gates). While Paeter rested there, a trollish ShadowKnight violently expressed his discontent with the quality of policing in the Freeport area. Several times, actually. The guard corpses were fairly thick in the area.

This is a tactic used by some high-level folks to gain experience points with relatively low risk to themselves. Most guards are, apparently, an even match for a character of 45th- 50th level. I am not sure whether I can endorse this activity: the guards are around to protect the newbies. Kill all the guards, and the newbies have no one to run to when they have a monster on their tail.

Mind you, Paeter is not yet at a level that he can be any kind of a threat to the guards. Maybe my attitude will change later on. 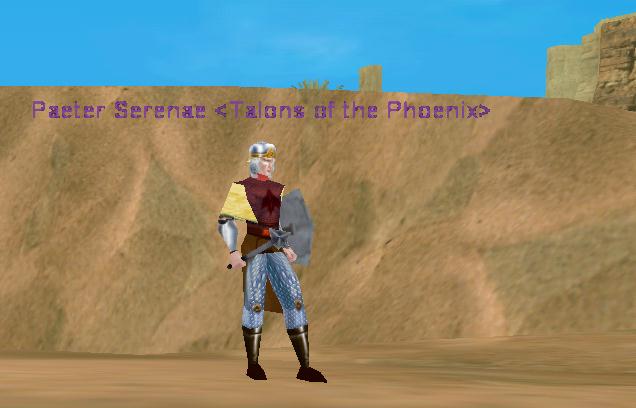 In between Cazic Thule and Freeport, are (more or less in order): Feerrott, Innothule Swamp, the Southern Desert of Ro, Oasis of Marr, and North Ro. Here is Paeter, standing (I believe) in the Oasis of Marr. It is really a desert area with some greenery in the middle and an ocean to one side: thus the scene above doesn’t look very much like an oasis.

The Oasis is a great place for characters around 18th-20th level to solo. There are plenty of crocodiles, some orcs, some dervishes, and so on that are sufficiently challenging (I.E.: they /con as blue) to provide experience. There are some risks: the Sand Giants and Spectres are about 20 levels higher. But, this is where Bevarin settled when he came back from vacation. He has several levels to catch up so that he can group with Greyok and the other folks Paeter bashes with.

This is a regular problem in EverQuest: getting “left behind” level wise, so you can’t group with the people you want to group with. We all deal with it at one point or another. I help Bev a bit (we can still group), and he does a lot of solo bashing (which isn’t as much fun, in my opinion, as being part of a group).