I’ve been trying very hard to learn the piano now for something like three years. I can make a ton of excuses for why its so hard for me:

My instructor is incredibly patient and there is no doubt that I have made progress. I can read music now, and with a lot of practice I can manage to mangle a small piece of music in a way that leaves it sounding vaguely like it is supposed to sound But day to day, as I sit at the piano making the same mistakes over and over, I realize there is something else wrong with me.

I have stupid hands. I’ve been calling them stupid for some time now: honestly, its like they have a mind of their own, and its in direct disagreement with the brain in my head. I can hear the music, I can even read it, but my hand will go off and hit the wrong keys all on its own. As my instructor would tell you, I occasionally argue with my hands: sometimes when I make a mistake while reviewing my lesson progress, I’ll pause to slap my erring hand and tell it to quit being so stupid.

I thought I was alone in this. But last night I was watching an episode of Futurama (The Devil’s Hands are Idle Playthings). Fry was trying to learn how to play the Holophoner, and was taking lessons. He sucked, pretty much like I do, and described his problem pretty much the same way I do. Basically, he says he can hear the music, but when he tries to play hit his hands keep messing it up. He says his music teacher said he has “stupid hands” 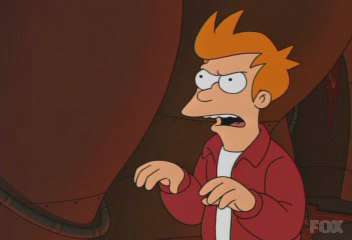 He even looks angry at them, like I do. Its uplifting to know that I’m in good company…with an unemployable guy who accidentally quick-freezes himself while delivering a pizza and wakes up a thousand years in the future.